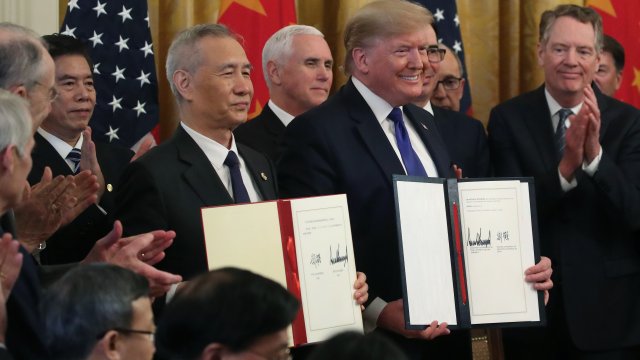 The stability of the new U.S.-China trade deal rests largely on whether China can successfully buy up enough U.S. goods to meet its commitments.

The trade agreement requires China to buy an additional $200 billion of U.S. imports over the next two years. Those purchases come in four different categories: $77.7 billion in manufactured goods, $32 billion in agriculture, $52 billion in energy products and $38 billion in services.

Meeting those targets will mean a substantial increase in purchasing by China: The country's import targets are based on data from 2017, and U.S. trade with China has fallen off in recent years. Agricultural products in particular will be a tough target to meet. China will have to rebound from a slump in U.S. farm imports to buying record amounts of agricultural goods.

China and the U.S. have both insisted the purchasing targets are achievable. But it's not yet clear how China plans to meet those goals. The country recently declined to raise its global import quotas for wheat, grain and rice, despite needing to bring in more of those goods to hit the targets in the deal.

If one side or the other isn't holding up their end of the bargain, the trade deal's dispute process could allow the wronged side to suspend some of its obligations in retaliation. This would potentially let the U.S. reimpose its tariffs if China is found to be in violation of the deal.

Of course, this is still just phase one of what's expected to be a broader trade deal between the U.S. and China. President Trump said during the ceremony that work on phase two would begin once the details of this deal are in place. The U.S. and China still have a lot of outstanding issues to resolve: working on those issues could take a while, possibly beyond the 2020 election this November.