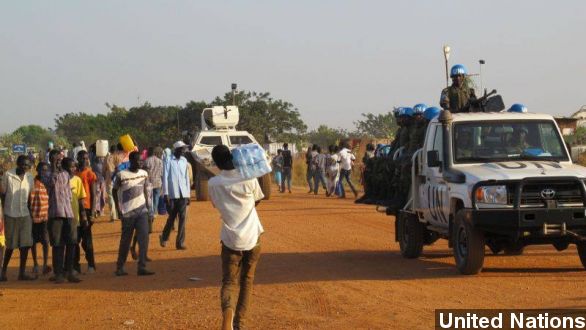 Four service members were injured when two U.S. military aircraft were fired on in South Sudan.

​​Two U.S. military aircraft were fired on while on a rescue attempt in South Sudan.

The Pentagon has confirmed at least four service members were injured, though none were killed in the attack — an attack the South Sudanese government blamed on rebel soldiers. (Via Al Jazeera)

The aircraft was reportedly on a mission to evacuate U.S. citizens from the country when it was struck while trying to land. At least one aircraft was seriously damaged. (Via BBC)

BARBARA STARR: "When U.S. military aircraft land in these places, as they come in for approach, this is when they are most vulnerable." (Via CNN)

The fighting has spread in South Sudan since a reported coup attempt a week ago. Now, opposition forces are trying to retake the capital city of Juba and overthrow President Salva Kiir. (Via CCTV)

So far, an estimated 500 people have been killed in the clashes. Thousands have taken refuge at U.N. camps across the country.

Earlier this week, President Obama sent in U.S. troops to protect the embassy in Juba. The violence has the U.S. and much of the international community concerned civil war could break out should the two sides not reach a political solution.

"The Americans are likely to react to this very, very stiffly indeed. President Obama, John Kerry — the secretary of state — have all said, 'Look, sort this out. You need a political solution.'" (Via Sky News)

NBC reports the injured service members are being treated in Nairobi, Kenya. This attack comes just two days after three U.N. peacekeepers were killed amid the violence.