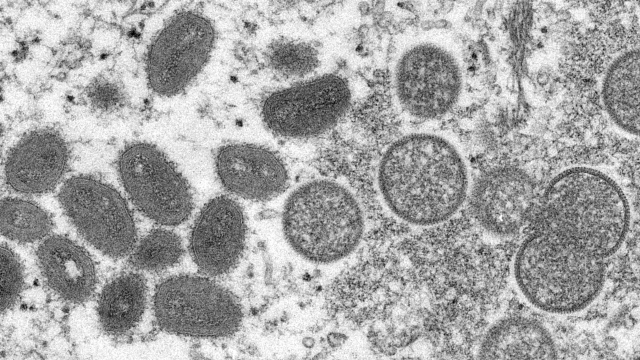 As of Tuesday, the U.S. had identified 306 cases in 27 states and the District of Columbia.

Reacting to a surprising and growing monkeypox outbreak, U.S. health officials on Tuesday expanded the group of people recommended to get vaccinated against the monkeypox virus.

They also said they are providing more monkeypox vaccine, working to expand testing, and taking other steps to try to get ahead of the outbreak.

"We will continue to take aggressive action against this virus," said Dr. Ashish Jha, White House COVID-19 response coordinator, who has also been playing a role in how the government deals with monkeypox.

The administration said it was expanding the pool of people who are advised to get vaccinated to include those who may realize on their own that they could have been infected. That includes men who who have recently had sex with men at parties or in other gatherings in cities where monkeypox cases have been identified.

Most monkeypox patients experience only fever, body aches, chills and fatigue. People with more serious illness may develop a rash and lesions on the face and hands that can spread to other parts of the body.

The disease is endemic in parts of Africa, where people have been infected through bites from rodents or small animals. It does not usually spread easily among people.

Last month, cases began emerging in Europe and the United States. Many — but not all — of those who contracted the virus had traveled internationally. Most were men who have sex with men, but health officials stress that anyone can get monkeypox.

Case counts have continued to grow. As of Tuesday, the U.S. had identified 306 cases in 27 states and the District of Columbia. More than 4,700 cases have been found in more than 40 other countries outside the areas of Africa where the virus is endemic.

There have been no U.S. deaths and officials say the risk to the American public is low. But they are taking steps to assure people that medical measures are in place to deal with the growing problem.

One of the steps was to expand who is recommended to get vaccinated. Vaccines customarily are given to build immunity in people before they are ever infected. But if given within days or even a few weeks of first becoming infected, some vaccines can reduce severity of symptoms.

A two-dose vaccine, Jynneos, is approved for monkeypox in the U.S. The government has many more doses of an older smallpox vaccine — ACAM2000 — that they say could also be used, but that vaccine is considered to have a greater risk of side effects and is not recommended for people who have HIV. So it's the Jynneos vaccine that officials have been trying to use as a primary weapon against the monkeypox outbreak.

Officials said limited Jynneos doses will be allocated "using a four-tier distribution strategy that prioritizes jurisdictions with the highest case rates of monkeypox," and that the number of doses distributed would be based on the number of people at risk for monkeypox and on how many of them can't get ACAM2000 because of HIV.

That suggests the largest number of doses might go to states like New York, California and Illinois, each of which has reported more than 40 cases. However, officials on Tuesday did not say exactly which jurisdictions would be at the top of the list.

David Harvey, executive director of the National Coalition of STD Directors, was critical of the government's announcement.

"We have more questions than ever about how this vaccine will make it to those most at-risk in an equitable way and how the U.S. will ramp up testing and provide access to the best therapeutics," Harvey said in a statement.

Another change announced Tuesday: Until now, the Centers for Disease Control and Prevention has advised that vaccines be given after exposure to people whom health officials identify as close personal contacts of cases. But on Tuesday, CDC officials say they are expanding the recommendation to people who were never identified but may realize on their own that they may have been infected.

That can include men who have sex with men who have recently had multiple sex partners in a venue where there was known to be monkeypox or in an area where monkeypox is spreading.

"It's almost like we're expanding the definition of who a contact might be," said the CDC's Jennifer McQuiston. If people have been to a party or other place where monkeypox has been known to spread "we recommend they come in for a vaccine," she said.

The CDC's expansion follows similar steps taken in New York City and the District of Columbia.

The District of Columbia has identified 19 cases, but case-tracking investigations revealed that some of the infected men had been in gatherings where they were hugging, kissing or in other forms of close intimate contact with people they didn't know, said Anil Mangla of the D.C. health department.

It was clear that "we were missing something here," and needed to start offering services to others, said Mangla, an epidemiologist.

Last Thursday, New York City's health department — armed with 1,000 of doses of Jynneos from the federal government — announced it was opening a temporary clinic to offer the vaccine to all gay, bisexual and other men who have sex with men who have had multiple or anonymous sex partners in the previous two weeks.

But all the appointments quickly filled up that day, and the last round of appointments was Monday. "Until we receive more supply we are unable to release additional vaccination appointments," said Patrick Gallahue, a spokesman for the city's health department, in an email.

On Monday, the District of Columbia's health department took a similar step. The department started taking appointments at 1 p.m. Monday but had to stop after 20 minutes, Mangla said.

The department only had 200 doses of Jynneos, and it was clear at that point that it didn't have the vaccine supply or staffing to continue to sign up new people, he said.