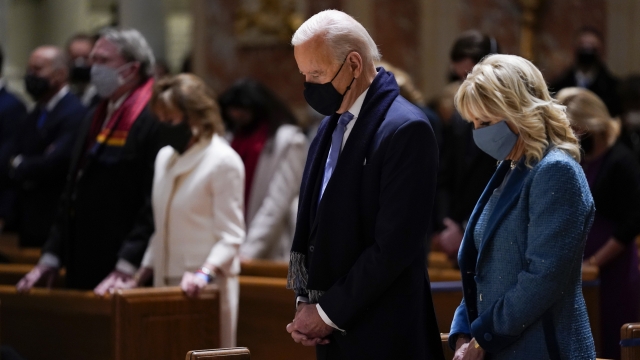 The Church is one step closer to denying Communion to high-profile leaders who openly support abortion rights.

“Does the body of bishops approve the request of the committee on doctrine?"

A controversial.. and divisive move from Catholic leaders in the U.S.

The U.S. Conference of Catholic Bishops backed the drafting of new guidelines for the Eucharist, bringing the Church one step closer to denying Communion to high-profile leaders who openly support abortion.

Top of the list in that category— President Joe Biden— just the second Catholic president in U.S. history. The move could also draw the line for others, like House Speaker Nancy Pelosi, from taking part in the Eucharist.

But it’s not a move the Vatican, the Pope or the majority of U.S. Catholics agree with. Most think Pres. Biden should continue to receive the sacrament.

And critics fear the decision comes at a time when church membership is already at an all-time low. Jamie L. Manson of Catholics for Choice  tells Newsy the move showcases the growing disconnect between Church leaders and the Catholic community as a whole.

“They have bishops who are just treating this... they're using a taboo morality of absolutes that just don't reflect the complexities of human experience.”

When it comes to Catholic politicians though, the Bishops’ motion could very well wind up becoming just another non-starter. House Speaker Pelosi  shrugged it off before the vote was even cast.

“I think I can use my own judgment on that.”

And some priests and bishops are of the same mind. The Archbishop of Washington publicly stated months ago he had no plans to deny President Biden communion.

“It’s a matter of the responsibility that I have as the Archbishop to be engaged, and to be in dialogue with him, even in those areas where we obviously have some differences.”

For the time being, the decision to deny communion ultimately will be left to those individual bishops.  That leeway sets the stage for even more disorder … on a subject that’s already lacking clarity.

“Different bishops will make different decisions. I think as long as we can do that while respecting each other's decision in the matter, it could minimize the sort of confusion that will be cast.”