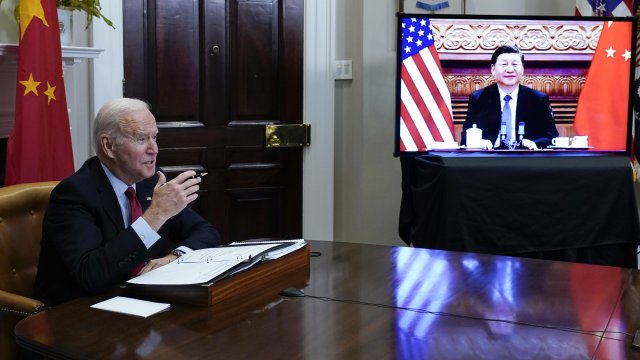 Biden administration officials say the goal is to establish "guardrails" in the complicated relationship and avoid "unintended conflict."

"The meeting in our view is an opportunity to set the terms of our competition," White House press secretary Jen Psaki said.

With tensions spanning across issues concerning the global supply chain to reports of Beijing testing hypersonic missiles, the top U.S. general sounded the alarm in an interview with Bloomberg TV last month.

"It is very concerning," Gen. Mark Milley said. "I think I saw on some of the newspapers that they used the term 'Sputnik moment.' I don't know if it's quite a Sputnik moment, but I think it's very close to that."

The White House has, overall, stayed relatively tight-lipped leading up to the summit.

"President Xi is somebody he's spent time with, he's had face-to-face conversations with. And because of that, the president feels that he's able to have candid discussions with President Xi," Psaki said.

Biden administration officials say the goal is to establish "guardrails" in the complicated relationship and do what is possible to avoid "unintended conflict."

"We welcome the competition," President Biden said. "We're not looking for conflict."

China's foreign ministry signaled the meeting is an effort to "explore ways of mutual respect and peaceful coexistence."

Chinese state media editorials paint a different view, with president Xi expected to warn the U.S. to "step back" on Taiwan.

The U.S. recently stood by its commitment to the self-ruling island.

"The value of our partnership and our support for Taiwan is rock solid," head of the American Institute in Taiwan Sandra Oudkirk said.

China claims Taiwan as its territory and has sent dozens of warplanes into Taiwan's air defense identification zone.

The U.S. accused China of "destabilizing" activity. Cybersecurity is reportedly a main focus in discussions on the U.S. side.

It's still unknown whether COVID, an issue that brought the world to its knees, will come up.

President Biden had this response when asked whether he would press China to cooperate with another World Health Organization investigation into the origins of the virus back in June.

"Let's get something straight: We know each other well; we're not old friends," he said. "It's just pure business."

Monday's meeting sets a marker for the two nations in discussions to come as China's ruling Communist Party took a rare step last week to pave the way for Xi to rule the country for a third term in office next year.