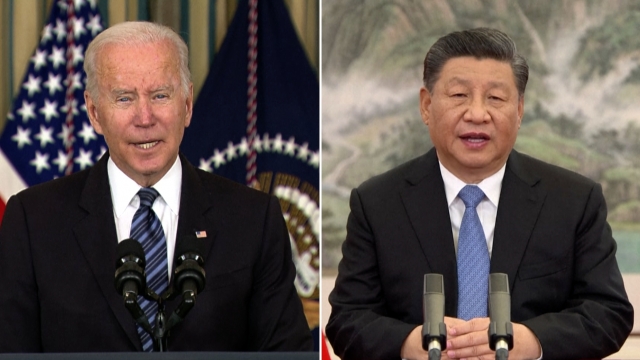 China's government insist its behavior is peaceful and accuses the U.S. of trying to stem China's growth with a "Cold War zero-sum mentality."

Monday's summit marked the first time since entering the White House that President Joe Biden is meeting face-to-face with Chinese leader Xi Jingping, albeit through a screen.

"President Xi is somebody he's spent time with, he's had face-to-face conversations with, and because of that, the president feels he's able to have candid discussions with President Xi," White House press secretary Jen Psaki said.

A senior administration official says the virtual summit is meant to manage competition and prevent conflict, after months of tension, saying the unfolding relationship between the countries "does not have a historical parallel."

Speaking through interpreters, the president planned to discuss a litany of security concerns: China's aggression in international waters — flying its war planes over Taiwan; cyberattacks on U.S. businesses and government and on China's own soil; shutting down probes into COVID-19 origins; and violating human rights among an ethnic minority in Xinjiang, the Uighurs.

"China and the U.S. have endless issues to deal with," Wilson Center global fellow Michael Davis said. "And this meeting, I think, is just the opening attempt to try to reach out and solve some of them."

Xi and his government insist their behavior is peaceful, and accuse the U.S. of trying to stem China's growth with a "Cold War zero-sum mentality."

Beijing has rejected arms control talks, and the Pentagon says the country will likely have 1,000 nuclear warheads by 2030.

Sources tell Newsy the U.S. intelligence community sees China's July test of a hypersonic weapon in space as a "Sputnik moment" — a historical reference to fear that an adversary is advancing faster than the U.S. Now, intelligence officers hope this summit opens the door to more communication.

"I don't think we're going to see a major shift in China's behavior toward Taiwan, toward the Uighurs in Xinjiang, toward other human rights issues. In the Chinese view, the Chinese official view, these are domestic issues, and they're issues where international law doesn't have a lot of traction," University of Pennsylvania's Jacques deLisle said. "China's confidence is based on its own rise, its own sense of its growing clout and ability, and the belief in many circles in China that the U.S. is in at least relative decline of a fairly irreversible sort."

Xi comes as he consolidates power, after a resolution passed that lays out a path for him to serve a record third term, until at least 2027.