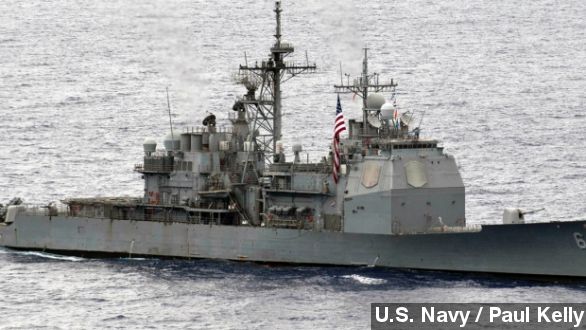 The USS Cowpens was forced to take evasive action when a Chinese Navy ship cut across its path.

Increased tensions between the U.S. and China almost led to disaster last week after a U.S. ship nearly collided with a Chinese vessel in the South China Sea.

Officials say the USS Cowpens was operating in international waters near China's only aircraft carrier, the Liaoning, on Dec. 5. The Cowpens was forced to take evasive action after a Chinese ship escorting the Liaoning cut across the U.S. vessel's path. (Via Al Jazeera)

The two ships exchanged bridge-to-bridge contact in what one defense official characterized as a "tense but professional" communication, and the vessels went their separate ways without incident. In a formal statement, the U.S. Pacific Fleet said the near miss "underscores the need to ensure the highest standard of professional seamanship ... to mitigate the risk of an unintended incident or mishap." (Via The New York Times)

The close call comes during a rough patch in U.S.-China relations. China's recent attempt to establish an air-defense zone over contested territory in the East China Sea sparked protests and challenges from the U.S. and its allies in the region. (Via CCTV)

Now, analysts are scrambling to interpret this latest incident. One U.S. naval official told Stars and Stripes it's unclear what the Chinese ship was trying to accomplish by confronting the Cowpens.

"I mean, from my perspective, having him stop in the middle of the South China Sea is kind of dumb. ... [The Chinese saying] 'Go away, get out of here' [would make more sense]. But 'stop' doesn't really do anything because all that does is just maintain the status quo.​"

An expert for the Center for Naval Analyses downplayed the maneuver's significance to The Washington Post, calling it "a local initiative by the local Chinese commanders ... [using] less than professional methods to protect their carrier."

But a fellow at the Heritage Foundation said the confrontation was "a deliberate effort to intimidate. ... The Chinese are trying to make it clear that, if the US wants to operate in these waters, then it should be prepared to be operating under a high state of tension." (Via Christian Science Monitor)

A State Department spokesperson says the U.S. has raised the incident with high-level Chinese officials.