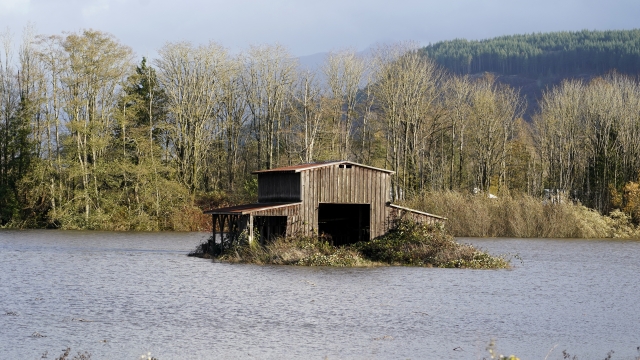 The Coast Guard brought in a helicopter to rescue people who were trapped in their homes by rushing flood waters.

A U.S. Coast Guard helicopter crew rescued six adults and four children, including a baby, from a flooded area of northwest Washington state on Monday. Video from on board shows people being hoisted up into the helicopter amid flood waters.

Inside And Outside Climate Talks, Youths Urge Faster Action

Friday was the day the U.N. conference said it was dedicating to youth. But the schedule didn't reflect that, at times.

Flooding and landsides prompted the complete closure of the West Coast’s main north-south highway near Bellingham, Washington, as the culmination of days of storms and high winds wreaked havoc in the Pacific Northwest.

The Interstate 5 closure was caused by the ongoing threat from debris and floodwaters. The extreme weather came from an atmospheric river - a huge plume of moisture extending over the Pacific and into Washington and Oregon.

More than 158,0000 customers were without power in Western Washington at one point, dozens of people had evacuated their homes because of rising rivers and at least one person was missing. Conditions should be drier Tuesday but flood warnings remain in effect.