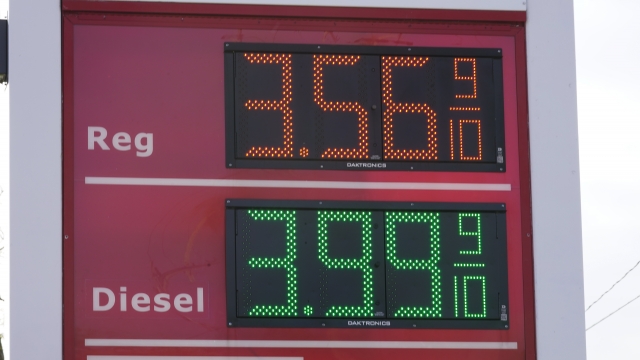 Over the past 12 months, the costs paid by a typical American family have surged by roughly $4,000, according to calculations by Jason Furman.

The Labor Department also reported Friday that prices rose 0.8% from October to November — a substantial increase, though slightly less than 0.9% increase from September to October.

Inflation has been inflicting a heavy burden on consumers, especially lower-income households and particularly for everyday necessities. It has also negated the higher wages many workers have received, complicated the Federal Reserve's plans to reduce its aid for the economy and coincided with flagging public support for President Joe Biden, who has been taking steps to try to ease inflation pressures.

Fueling the inflation has been a mix of factors resulting from the swift rebound from the pandemic recession: A flood of government stimulus, ultra-low rates engineered by the Fed and supply shortages at factories. Manufacturers have been slowed by heavier-than-expected customer demand, COVID-related shutdowns and overwhelmed ports and freight yards.

Employers, struggling with worker shortages, have also been raising pay, and many of them have boosted prices to offset their higher labor costs, thereby adding to inflation.

The result has been price spikes for goods ranging from food and used vehicles to electronics, household furnishings and rental cars. The average price of a used vehicle rocketed nearly 28% from November 2020 to last month — to a record $29,011, according to data compiled by Edmunds.com.

The acceleration of prices, which began once the pandemic hit as Americans stuck at home flooded factories with orders for goods, has spread to services, from apartment rents and restaurant meals to medical services and entertainment. Even some retailers that built their businesses around the allure of ultra-low prices have begun boosting them.

Over the past 12 months, the costs paid by a typical American family have surged by roughly $4,000, according to calculations by Jason Furman, a Harvard economist and former Obama White House aide.

In a statement Friday, President Biden said more could be done if Congress passed his sweeping social spending and climate package, which is intended to reduce household costs for health care, prescription drugs and child care.

"We have to get prices and costs down before consumers will feel confident in that recovery," the president said. "That is the top goal of my administration."

Though Americans' overall income has also increased since the pandemic, a new poll found that far more people are noticing higher inflation than higher wages. Two-thirds say their household costs have risen since the pandemic, compared with only about a quarter who say their incomes have increased, according to the poll by The Associated Press-NORC Center for Public Affairs Research.

Among them is Karyn Dixon, who received a raise this year that hasn't come close to covering her higher expenses. Dixon, 55, works as a materials handler at a warehouse near her home not far from Knoxville, Tennessee.

Like many companies at a time when some worry about their workers leaving for higher wages elsewhere, her employer raised pay – in her case by $1.75 an hour. Yet that'd hardly enough to keep pace with higher health insurance costs and costlier food and gas.

Pricier gas "puts a damper on things, especially when you live in a rural area," Dixon said. "If we need anything important, we have to travel to the next town over, or Knoxville. Our options are limited."

"There really hasn't been much of a benefit from it," she said of the raise. "You make the extra money, but you turn around and have to pay more for food and gas, just so you can get to work."

Outside the U.S., too, surging inflation is squeezing households and businesses. In Europe, energy costs have driven up consumer prices to the highest level since the euro launched more than 20 years ago. Annual inflation in the 19 countries that use the euro hit 4.9% in November, according to the European Union's statistics agency. Inflation has gone much higher in some other European countries, with Poland close to 8%, Lithuania above 9% and Turkey at an eye-popping 21%.

For American consumers, the 6.8% jump in inflation for the 12 months that ended in November was the largest year-over-year increase since a 7.1% surge for the year ending in June 1982. That spike occurred at a time when the Federal Reserve had driven up interest rates to double digits in its effort to stem runaway inflation triggered by the oil price shocks of the 1970s.

The persistence of high inflation has surprised the Fed, whose chair, Jerome Powell, had for months characterized inflation as only "transitory," a short-term consequence of bottlenecked supply chains. Two weeks ago, though, Powell signaled a shift, implicitly acknowledging that high inflation has endured longer than he expected. He suggested that the Fed will likely act more quickly to phase out its ultra-low-rate policies than it had previously planned.

Doing so would put the Fed on a path to begin raising its key short-term interest rate as early as the first half of next year. That rate has been pegged at nearly zero since March 2020, when the coronavirus sent the economy into a deep recession. Borrowing rates would rise for some consumer and business loans.

Financial markets, which had largely anticipated Friday's inflation figures, took them in stride. Treasury yields and stock prices held relatively steady, while a measure of fear on Wall Street eased. Russell Price, chief economist at Ameriprise, said the market response suggests that investors have become accepting of the reality that the Fed will accelerate its pullback of the emergency economic aid it supplied after the pandemic.

Driving much of the inflation last month were energy prices, particularly gasoline pump prices, which are up a dizzying 58.1% from a year ago. The costs of housing, food, vehicles, airline tickets, clothing and household furnishings were also big contributors to the November price surge.

Core inflation, which excludes volatile food and energy prices, rose 0.5% in November. Over the past 12 months, core prices are up 4.9%, the biggest such increase since 1991.

Some economists are holding out hope that inflation will peak in the coming months and then gradually ease and provide some relief for consumers. They note that supply shortages in some industries have begun to gradually ease. And while higher energy costs will continue to burden consumers in the coming months, Americans will likely be spared from earlier forecasts that energy prices would reach record highs over the winter.

Oil prices have been declining modestly and leading, in turn, to slightly lower gasoline prices. Even more dramatically, natural gas prices have plummeted nearly 40% from a seven-year high reached in October. Food prices, too, could potentially ease as a result of sharp declines in corn and wheat prices from their highs earlier in the year.

What's more, the emergence of the omicron variant of the coronavirus has renewed the prospect of more canceled or postponed travel and fewer restaurant meals and shopping trips. All of that, if it happened, would slow consumer and business spending and potentially restrain inflation.

Still, analysts caution that unexpected developments, including heavy winter storms, with potentially increased demand for energy, could send energy prices surging again. And they note that easing overall inflation pressures will depend on further progress in normalizing global supply chains. White House officials have said they believe that a series of actions that the administration has taken, from boosting the processing of cargo from the ports of Los Angeles and Long Beach to the release of crude oil from the petroleum reserve, would help defuse inflation pressures.

Some outside economists have begun to echo that view.

"November could be the peak of the bad news on inflation," said Gus Faucher, chief economist at PNC Financial. "We are already starting to see energy prices decline. We are still dealing with dislocations from the re-opening of the economy, but I expect those problems in supply chains and labor shortages in some industries will get worked out over the next year."