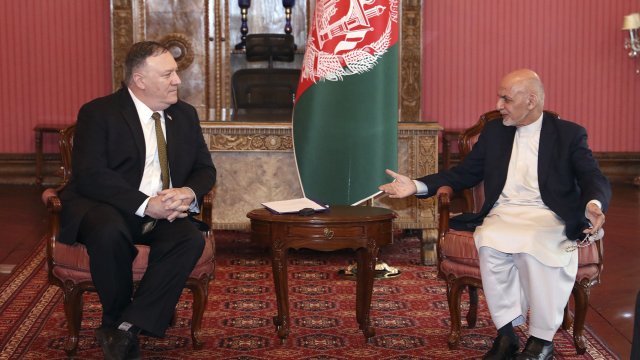 Secretary of State Mike Pompeo announced the aid cut after traveling to Afghanistan in bid to resolve power struggle splitting the government.

The U.S. is cutting off $1 billion in aid for the government of Afghanistan in frustration over political chaos in the country.

Two men are both claiming to be the legitimate president of Afghanistan. Afghan President Ashraf Ghani was sworn in for a second term on March 9 after claiming victory in recent elections.

But challenger Abdullah Abudullah, the country's former chief executive, charged that the election was stolen in "a coup against democracy." He declared himself the victor and held his own inauguration ceremony.

U.S. Secretary of State Mike Pompeo urgently flew to Afghanistan to meet with both men. But the State Department said Ghani and Abdullah couldn't agree on terms for forming "an inclusive government."

The rift threatens to undercut a fragile peace process aimed at ending the war in Afghanistan, the longest military engagement in U.S. history. On Monday, Pompeo announced he was pulling back $1 billion in aid and signaled he may cut another $1 billion next year if the political situation doesn't improve.

In a statement, Pompeo said: “Their failure has harmed U.S.-Afghan relations and, sadly, dishonors those Afghan, Americans and coalition partners who have sacrificed their lives and treasure in the struggle to build a new future for this country.”

The U.S. in February reached a tentative peace accord with Taliban forces fighting to overthrow the Afghan government. President Ghani then agreed to begin limited prisoner releases. They were to accelerate once peace talks began between the Taliban and the Afghan leadership.

Pompeo says the U.S. remains committed to the peace process.

“You should know that the peace process is the same. The United States will support, facilitate and participate in these peace discussions.”

But talks between the Taliban and the government, expected this month, never began. The Taliban is now accelerating military attacks on Afghan government forces.