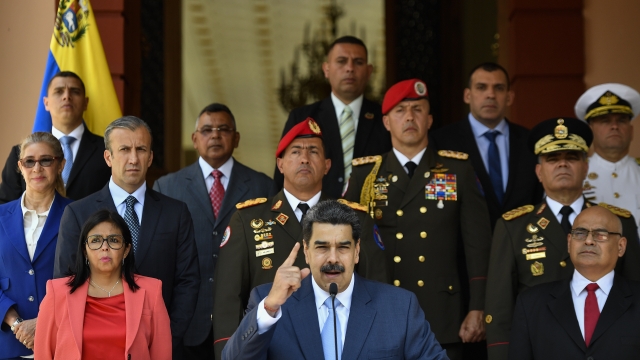 The leader of Venezuela's socialist regime and top officials are charged with facilitating cocaine shipments to the U.S.

The charges against Maduro and other Venezuelan officials were filed Thursday and announced by Attorney General William Barr. The Justice Department accused them of managing a drug trafficking organization that "sought not only to enrich its members and enhance their power, but also to flood the United States with cocaine."

"The Department of Justice is announcing the unsealing of a superseding indictment, filed in the Southern District of New York, against four defendants, including Nicolas Maduro as well as the current head of Venezuela’s constituent assembly, the o former director of military intelligence and a former high ranking general, for their involvement in narco-terrorism."

Meanwhile, CNN is reporting that the Trump administration was moving to designate Venezuela as a state sponsor of terrorism.

That could bring additional economic sanctions against the country's socialist regime and a population facing shortages of food and other staples.

The U.S. criminal charges allege that Maduro personally directed a Venezuelan drug network, which helped ship tons of cocaine from Honduras and other countries to the U.S.

The Justice Department is offering a $15 million reward for information leading to the Venezuelan president's arrest or conviction.