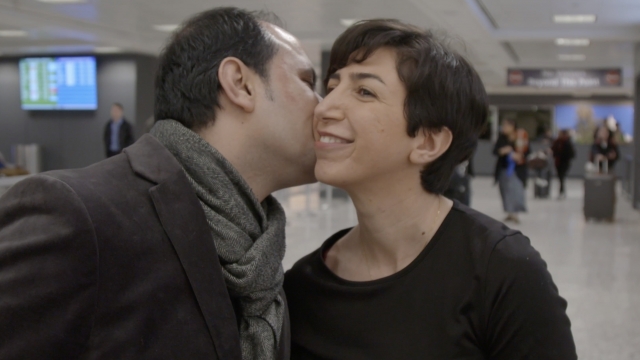 Iman Dehzangi and Gazelle Taherzadeh lived apart for three years because of the ban, and they almost gave up on living together in the U.S.

When Dr. Iman Dehzangi and Dr. Gazelle Taherzadeh got married in 2016, they expected to be living together in the U.S. within a year or two, both working on postdoctoral research in bioinformatics.

"I think I surprised her," Dehzangi said. "We went to the The Twelve Apostles, and I proposed to her there."

"I didn't expect it at all," Taherzadeh remembered. "He was not a marriage guy."

But a year or two living apart turned into more than three when President Trump announced a near-total ban on visas from specific countries in 2017. The ban included Iran, where they both grew up.

It kept them apart until just a few weeks ago, when Taherzadeh landed at Washington's Dulles International Airport just a few months after being approved for a visa.

"It's been a long journey for us. And I think for everyone else, too," Taherzadeh said.

Taherzadeh and Dehzangi are together again because the U.S. approved her waiver, which means she's eligible for a visa even though she's subject to the travel ban.

And she's not the only one.

In the first two years of the travel ban, the U.S. issued 7,679 total waivers, or about 10% of applications.

But according to a Newsy analysis, the proportion approved has more than doubled in recent months. The U.S. granted more than 9,473 waivers by the end of September, 12,959 by the end of October, and more than 17,798 by Dec. 31. Officials approved more than 20% of 79,769 total applications. But there's still a significant backlog impacting hundreds of thousands of people.

The Trump administration tells Newsy it's using a new, automated processing system to screen waivers, and that's why more are being approved.

Dehzangi and Taherzadeh say the travel ban turned their world upside down.

Taherzadeh was set to join Dehzangi in Baltimore, where he leads the bioinformatics program at Morgan State University. She had a job offer at the nearby University of Maryland. The travel ban made that impossible.

"I had to reject it. I don't think it was a one-time opportunity in my life, but it was a highlight in my life," Taherzadeh reflected. "You cannot change your nationality, you cannot change the place you were born, that's the thing. And that's something out of our hands."

"When we got that [news], it was like another punch in the face," Dehzangi said.

Taherzadeh applied for a waiver in July 2018. Then they waited.

"When I left Australia to come to the U.S. to start the semester, it was one of the hardest things that I did," Dehzangi said. "Because I didn't know when she's going to join, I didn't know how long it's going to take, and I didn't want to separate again."

Advocates and lawmakers have fought against that kind of separation since President Trump announced the ban three years ago this week. They also say the restrictions are discriminatory, since the largest group of people impacted are from Muslim-majority countries: Iran, Iraq, Yemen, Somalia and Syria. The restrictions also bar people from North Korea and certain government officials from Venezuela, but the number of people who apply from those countries is significantly smaller.

The policy is also affecting international students, even though student visas are intended to be an exception. This week, Alireza Yazdani Esfidajani, an Iranian student, was detained and then deported after arriving in Detroit to study for his doctoral degree at Michigan State University. He's reportedly the 15th Iranian student to be denied entry since August, despite having a valid visa.

In a statement, U.S. Customs and Border Protection said: "Applicants must demonstrate they are admissible into the U.S. by overcoming all grounds of inadmissibility including health-related grounds, criminality, [and] security reasons."

The president confirmed to the Wall Street Journal that he is considering expanding the travel ban to as many as seven more countries. Politico first reported the list could include Belarus, Myanmar, Eritrea, Kyrgyzstan, Nigeria, Sudan and Tanzania.

"Sudan is vastly majority Muslim, [and] the other countries do have significant Muslim populations,” Farhana Khera of Muslim Advocates told Newsy. "So the brunt of this ban will still be primarily borne by Muslim populations."

Dehzangi testified about his case before Congress in September. He says members of Congress helped push his case to the top of the list.

"We have something in both of us. We are fighters, you know? We fought it," Dehzangi said. "And I would say for those that are waiting, I would say do your best. Do anything that you can do, because it's about your right."

The travel restrictions are being fought in court, and Democrats have introduced the No Ban Act in the House. On Monday, Speaker Nancy Pelosi announced the House would soon mark up and send the bill to the floor for a vote. It would prevent sweeping visa restrictions based on nationality or religion without a proven national security rationale.

The Trump administration says the current restrictions are vital for national security.