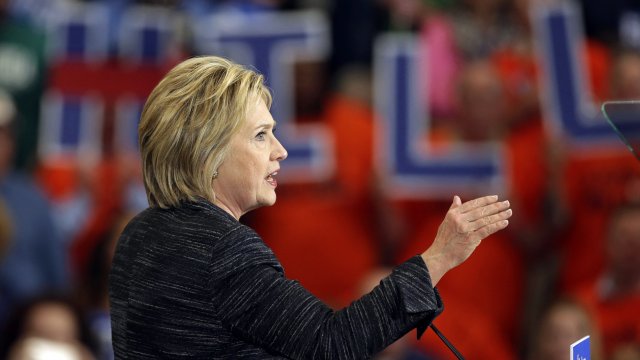 The director of National Intelligence on Tuesday declassified information from a Russian intelligence report that claimed Hillary Clinton during the 2016 race approved a plan to "stir up a scandal" tying Donald Trump to Putin and the hacking of the Democratic National Committee.

In a letter to Senate Judiciary Committee chairman Lindsey Graham, director John Ratcliffe acknowledged the U.S. intelligence community “does not know the accuracy of this allegation or the extent to which the Russian intelligence analysis may reflect exaggeration or fabrication.”

The move infuriated Democrats, who said that the release was helping Russia spread disinformation and aiding in their efforts to meddle in American elections.

A spokesman for Clinton told Politico the claim was "baseless" and the publication cited sources saying that Democrats and Republicans on the Senate Intelligence Committee had earlier rejected the claim as not factual.

The Washington Times quoted Graham saying the issue of whether the claim was true was irrelevant.

“Whether these allegations are accurate is not the question. The question is did the FBI investigate the allegations against Clinton like they did Trump? If not, why not? If so, what was the scope of the investigation? If none, why was that?” Graham said.

Some experts described the country's top intelligence official declassifying information not confirmed by the U.S. as highly unusual.

Former CIA Deputy Chief of Staff to John Brennan told Newsy's Sasha Ingber: "Russian interference in the election was real, intense, and unprecedented in scale and scope. It was authorized personally by Putin to hurt Secretary Clinton and to promote the electoral prospects of Donald Trump. The intelligence on this is incontrovertible and the analysis unimpeachable."

He added that "Trump's own head of counterintelligence has publicly stated that the Russians are once again helping Donald Trump... Ratcliffe should be ashamed of his blatant politicization of his position."