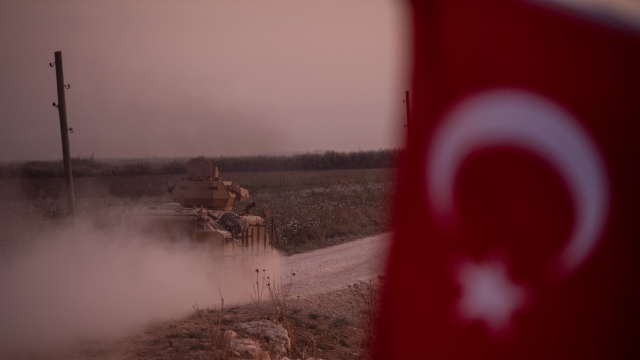 The U.S. is investigating allegations of war crimes carried out by Turkey during its recent military offensive in Syria.

On Wednesday, U.S. special envoy for Syria Jim Jeffrey told the House Foreign Affairs Committee: "Many people fled because they're very concerned about these Turkish-supported Syrian opposition forces, as we are. We've seen several incidents which we consider war crimes."

Syrian Democratic Forces are accusing the Turkish-backed proxy forces of killing unarmed prisoners, civilians and a Kurdish political leader, after videos circulated online allegedly showing some of the killings.

Jeffrey's comments came the same day President Trump announced he's lifting sanctions that the U.S. placed on Turkey related to its invasion of Syria. He said Turkey assured him it had reached a "permanent" cease-fire in the region.

Earlier this month, President Trump threatened to punish Turkey economically if it did "anything outside of what we think is humane" during this offensive.

On Tuesday, Defense Secretary Mark Esper told CNN that Turkey should be held accountable if these allegations prove to be true.

"I've seen the reports as well. We're trying to monitor them. They are horrible and if accurate, and I assume that they are accurate, they would be war crimes. I think all of those need to be followed up on. I think those responsible should be held accountable, in many cases it would be the government of Turkey — [it] should be held accountable for this because we cannot allow those things to happen," Esper said.

Turkey has denied all allegations of war crimes.