The U.S. Is Still Struggling To Solve The Homelessness Crisis 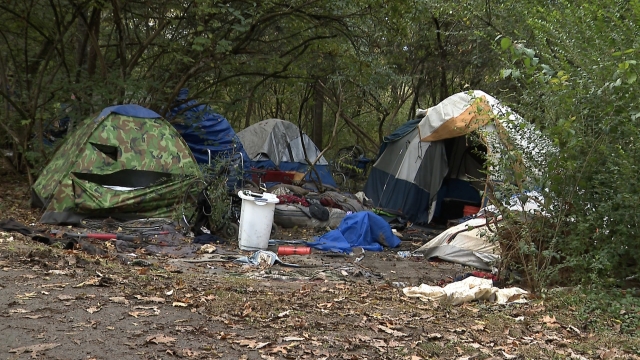 "Homelessness is a choice, not by the people living on the streets, but by the rest of us when we look the other way," says one researcher.

In Nashville, finding affordable housing units is hard to come by.

The city has a huge deficit when it comes to affordable housing, with affordable units being lost and sold to developers daily, some are left with no choice but to live on the streets.

Terry Warren takes it day by day. He's currently living in temporary housing and taking care of his adopted daughter.

They moved in a couple weeks ago after the city of Nashville notified residents they were closing down their encampment as part of a push to end homelessness.

He says he has the Salvation Army and a local nonprofit, Open Table Nashville, to thank.

"With their help, we can become normal, productive citizens again. That's all I ever want anyway. Not everything is going to be the way you want it to be. You might not want that handout, but you might not have no choice. That's what happened to me. Didn't have no choice," Warren explained.

They were living under a bridge, until the city said it was time to go. Now there's a fence and a sign that says, "no encampments."

At one point about 30 people were living under the Jefferson Street Bridge in Nashville, according to Warren.

Now, he's in a hotel. The Salvation Army is helping him and others find permanent housing options.

The biggest barrier, she says: There is not enough affordable housing.

"The main driver of homelessness is inability to afford the rent. So as rents have gone up, wages have not kept up," said Shinn.

She also wants people to know that homelessness is temporary.

"The closest thing we have to a silver bullet to end homelessness would be an expansion of the housing choice voucher program to all the households that are poor enough to be eligible. But right now, there's enough funding for only about 1 in 4 eligible households, and waiting lists are long," Shinn says.

A homeless assessment report notes the number of veterans experiencing sheltered homelessness decreased by 10% between 2020 and 2021 — the largest one-year decline since 2015-2016.

"And we indeed cut veteran homelessness in half between 2010 and 2019 because the Department of Housing and Urban Development and the Department of Veterans Affairs put in the resources and mayors made housing veterans in their cities a priority, but nobody offered the same level of resources to other groups. And homelessness, among other groups, barely budged," Shinn explained.

Shinn asserts this is proof that we know how end homelessness.

"Homelessness is a choice, not by the people living on the streets, but by the rest of us when we look the other way. We have the resources in the United States to house everyone. It's a question of political will," says Shinn.

"All of the things that I saw up under the bridge, like the drug users and stuff like that, I really think that instead of them throwing them people out, what they really need to do is get them some counseling and help them get over that drug problem, then help them weave themselves back into society," says Warren.

At 67 years old, Warren says sharing his story is a step forward.

"If we don't speak, there's nothing to tell. But if we tell, then the world can hear and learn what's really going on out here."

What's next for Warren? He says his priority is his daughter who he adopted off the streets four years ago. He is still searching for permanent housing.