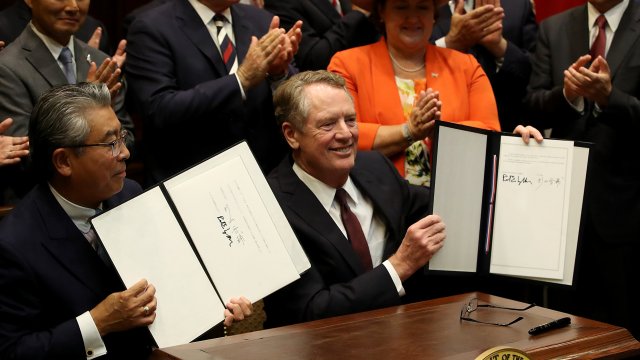 The trade agreement includes a new effort to establish some rules of the road when it comes to digital trade.

The new U.S.-Japan free trade agreement doesn't just cover the usual trade topics like beef and dairy. It's also part of a U.S. push to revamp the global trading system for the digital age.

Digital trade is the infrastructure and information that make up the internet: It covers the movie you're watching on your phone, the wireless router streaming that movie to you, and the payment you made to access that movie.

Right now, there aren't many global restrictions dictating how digital products or services should be traded. So the U.S. is trying to set the rules of the road on this issue, in its favor. The digital economy has grown rapidly in the U.S.; it accounted for 6.9 percent of U.S. GDP in 2017.

The U.S.-Japan digital agreement prevents either country from adding new taxes or tariffs on digital products and from blocking the free flow of information between the two countries. Those provisions cover the approximately $38 billion worth of annual digital trade between the U.S. and Japan.

While digital trade doesn't have many rules yet, warning signs are on the horizon: France recently levied a 3 percent tax on big digital businesses operating in the country, and India has considered imposing similar tariffs on big U.S. tech companies.

The U.S. is taking a similar approach to digital in other trade negotiations. Measures like those in the U.S.-Japan deal are also part of the U.S.-Canada-Mexico Agreement that's making its way through Congress.

A more comprehensive approach to world trade is in the works: The OECD is slated to come up with global rules for digital tariffs by the end of 2020.