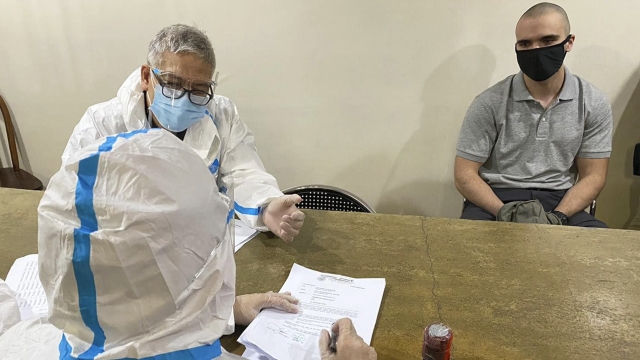 A U.S. Marine convicted of killing a transgender woman was deported from the Philippines Sunday, just days after he was pardoned by the Southeast Asian country's president. The United States paid for the marine's trip back on an American military cargo plane.

Lance Cpl. Joseph Scott Pemberton  was convicted in the October, 2014 killing of Jennifer Laude in an Olongapo City motel room after he discovered she was transgender. The active-duty Marine was sentenced to six to 12 years behind bars, later reduced to 10.

But Pemberton didn't go to prison. Instead he was placed in a cell in the Philippine military headquarters. That's because an agreement between the countries gives the U.S. some jurisdiction over its troops there.

Pemberton was granted early release this month for good behavior. Critics of the ruling say "good behavior" isn't a fair standard when he wasn't living with the general prison population.

A spokesman for President Rodrigo Duterte indicated the leader may have pardoned Pemberton last week as a bargaining chip to get COVID-19 vaccines from the U.S. The pardon provoked outrage from LGBTQ activists and from groups against the American military presence in the Philippines.

In a statement, the victim's mother noted that Pemberton had only served five years, saying, quote, “Ten years in prison is all we are asking ... It’s a short time to pay in jail for the life of my daughter.”