The U.S. Marks The 21st Anniversary Of The 9/11 Terror Attacks 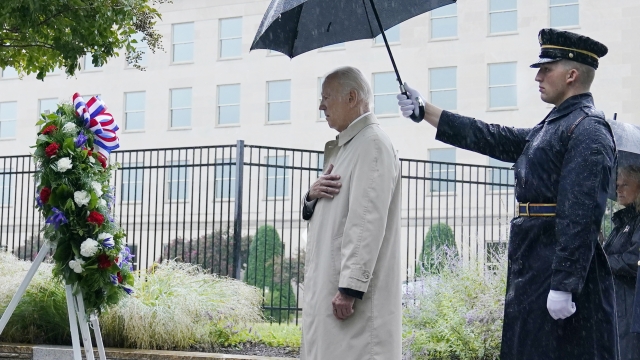 The ceremonies also come one month after a U.S. drone strike killed Ayman al-Zawahri, a key Al-Qaeda leader who helped plan the attacks.

In a somber ceremony at the Pentagon on Sunday, President Joe Biden marked the 21st anniversary of the 9/11 terrorist attacks.

The President laid a wreath honoring victims killed at the pentagon on September 11, 2001, whose names were also read out loud.

In a speech, President Biden called on Americans to stand together to defend democracy.

9/11 Memorials Stretch Across The U.S. To Honor And Educate

As we inch closer to the 9/11 anniversary, memorials will become a gathering place – for people to mourn and for younger generations to learn.

"Joe, I held your first baby grandson in my arms. You should have been holding him. We love you and we miss you," said Jim Giaccone, who lost his big brother, Joseph Giaccone, in the September 11 attacks.

"9/11 touched us all—it changed us all. But it reminded us that with courage and kindness we can be a light in that darkness," said the First Lady.

The attacks on the Pentagon and the World Trade Center sparked a global "war on terror" and two decades of fighting in Afghanistan, where U.S. troops withdrew from last year.

The ceremonies also come one month after a U.S. drone strike killed Ayman al-Zawahri, a key Al-Qaeda leader who helped plan the attacks.

Vice President Harris did not give a speech in New York. By tradition, no political figures speak at the ceremony at Ground Zero.