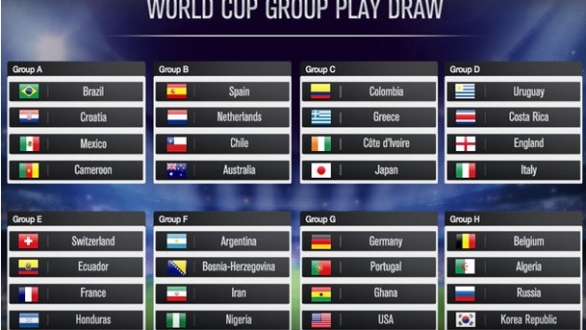 Did USA get drawn into the ultimate 'Group of Death' for the 2014 FIFA World Cup?

The USA men's soccer team didn't have luck on its side Friday — the luck of the draw, that is.

Many USA soccer fans were fearing the worst when it came to who the team would face in the 2014 FIFA World Cup qualifying rounds, outlining multiple ways the team could end up in a so-called "Group of Death." (Via The Oregonian, Business Insider)

And then ... it happened. Fourteenth-ranked USA will match up against Ghana, Portugal and Germany next June in Brazil.

The competition is stiff for the good ol' USA: Germany is ranked second in the world after Spain. Portugal is fifth and has superstar Cristiano Ronaldo to lean on. (Via FIFA)

As for Ghana, The Week explains, "While the US should be favored against Ghana, the Black Stars have a nasty habit of breaking American hearts at the World Cup." USA lost to Ghana in the last two World Cups.

Next summer, eight groups of four teams will face each other in a round-robin competition. Only the top two teams from each group go on to a single-elimination battle resulting in the World Cup. (Via Bleacher Report)

The round-robin phase is scored with points — a tie gets you one point while winning gets you three — and teams must earn at least four points to advance. That's why the draw of opponents is so make-or-break in this tournament. (Via Wikimedia Commons / Celso Flores)

Many USA fans feel their World Cup hopes are broken before the games even begin.

One Twitter user says: "USA got in the worst draw for the World Cup. We need at least one team to beat."

ESPN took a live poll of which group was the ultimate #groupofdeath, and 68 percent agreed that USA's Group G earned the hashtag.

However, some fans are optimistic. One tweeted: "USA can beat Ghana regardless of Ghana's streak against them. Draw one with Portugal and who knows."

If some are nervous and some are hopeful, ESPN's Paul Carr is indifferent. He tweets: "#USMNT's average SPI odds to advance were 44%; their 39% odds with this group aren't much worse."

And a writer for USA Today is happy either way, saying: "This team is deeper and more talented than ever before. Soccer in America has never been stronger. ... The goal shouldn't be to win the World Cup, it should be to raise the level."

Still, it would be nice to win the whole thing, wouldn't it?