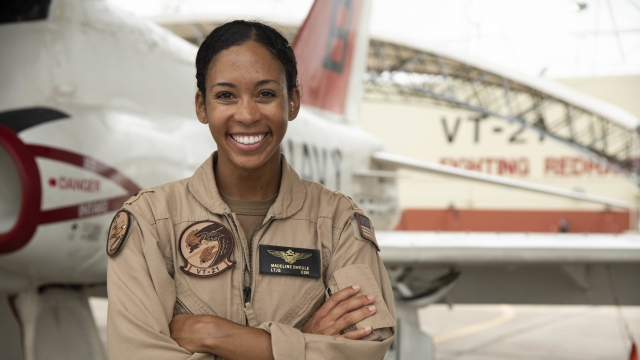 Lt. j.g. Madeline Swegle will move on to a post-graduate training for about a year before preparing for deployment.

The U.S. Navy's first Black woman tactical jet pilot earned her Wings of Gold on Friday as she graduated from a pilot training syllabus in Texas.

Lt. j.g. Madeline Swegle said there were times during her three years of flight training that she thought she might not succeed, but she said she just kept pushing herself and took things one step at a time.

Her commanding officer, Cdr. Matthew Maher, said it takes long hours, blood, sweat and tears to make it through the program.

"Every instructor here knows that we have a very high standard. ... She, just like all her fellow 'wingees,' met that standard of excellence and they're gonna go out and make all of us very proud," he said.

Swegle said she didn't necessarily set out to be the first Black woman to hold this role but was just following her dream of becoming a Navy pilot.

"My parents raised me, and they told me I could be whatever I wanted to be. ... I think that representation is important because we are a very diverse nation, so I would like everyone to believe that they can achieve whatever they want to do."

Maher said Swegle found out she was the first Black woman tactical jet pilot when she only had three flights left on her training syllabus.

"I've been in the Navy almost 20 years and served with people from all races, colors, creeds, genders, and it was surprising to hear that she could be a pioneer. And once it was confirmed it was like, well, this is really exciting," Maher said. "I hope that it inspires far more women and people of all kinds of all diverse backgrounds to look at this as a great career choice."

Swegle said she's honored to wear the wings, fly planes in the Navy and call herself a pilot.

She said: "I guess I hope that my legacy will be that there will be a lot of other women and minority women and just different faces that come forward and at least give the pipeline a shot. You know, like, be encouraged that they have all the tools that they need and, you know, follow their dreams."

Swegle will move on to a specialized, post-graduate flight training for about a year. Then she'll go to her fleet squadron and prepare to be deployed.