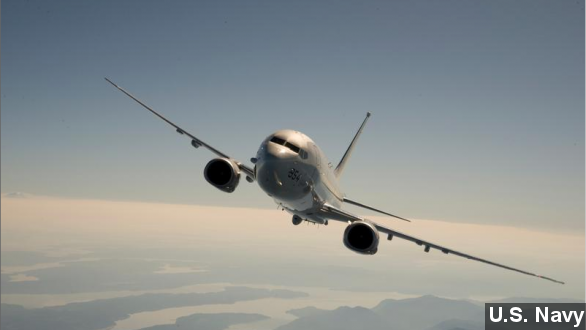 At the Dubai Airshow, the U.S. Navy unveiled a huge upgrade to its arsenal.

The U.S. Navy welcomed a new member to its arsenal over the weekend.

Meet the P-8A Poseidon. Built by Boeing in Seattle, it's described as a long-range anti-submarine warfare, intelligence, surveillance and reconnaisance aircraft. (Via Boeing)

"It is a designed to improve situational awareness by providing a single combined picture of the battlefield that can easily be shared among friendly forces. This represents really a game changing capability for the U.S. Navy's maritime patrol and reconnaissance force." (Via Boeing)

The plane has been in production for years but it finally made its first trip overseas to The Dubai Airshow. It is replacing a legacy fleet of aircraft — some of which are 50-years-old. (Via The Dubai Airshow)

The P-8A can fly higher, farther, and faster than the aircrafts it's replacing. It also has more advanced and powerful weaponry able to destroy both submarines and surface ships.

"There's a weapons bay in the back of the aircraft. That's designed to carry torpedo's ... to destroy a submarine target. The weapons we carry on the wings are called harpoon and they are designed specifically to engage a surface ship." (Via BBC)

The Navy says it's in the very early stages of becoming operational for missions, and will be fully operational by 2018.

The Navy currently has 6 P-8A's and is projecting to eventually have 117. Each aircraft has an average cost of $220 million.

We aren't allowed inside the aircraft, but its described as being filled with computer bays equipped with the most sophisticated military software. There's even some first class seating.