U.S. Offers To Destroy Some Of Syria's Chemical Weapons 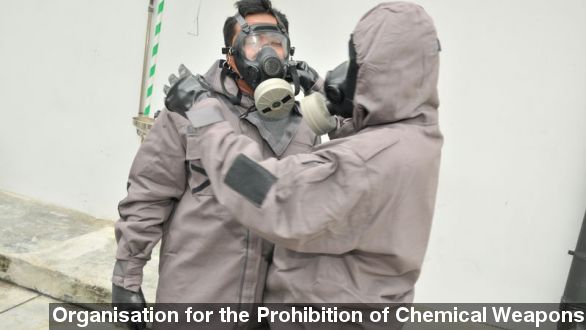 The Organisation for the Prohibition of Chemical Weapons announced the U.S. will contribute both technology and financing to the weapons dismantling.

Organisation for the Prohibition of Chemical Weapons

​Months after the U.S. condemned Syria's alleged use of chemical weapons ...

... it appears the U.S. is offering to help destroy some of those weapons.

The Netherlands-based Organisation for the Prohibition of Chemical Weapons is the group tasked with overseeing the destruction of Syria's chemical stockpile. (Via Euronews)

It announced Saturday the U.S. government will contribute both technology and financing to the weapons disposal — possibly on a ship in the Mediterranean. (Via CNN)

The U.N. Security Council set a mid-2014 deadline for Syria to destroy its weapons. Five hundred tons of those weapons, including nerve agents, were given priority status — meaning they have to be out of the country by Dec. 31 and destroyed by April.

But finding someone to take on that task of hasn't been easy. Recently, Albania and Norway each turned down U.S. requests to host the project. (Via Voice of America)

All this comes after weeks of diplomatic deadlock back in September, when a disarmament deal was struck between the U.S. and Russia as a way to avoid a military strike on Syria. (Via CBS)​

That, of course, over allegations the Syrian government gassed its own people in an August attack that left some 1,400 dead. Syrian President Bashar al-Assad has denied the accusations. (Via ABC)