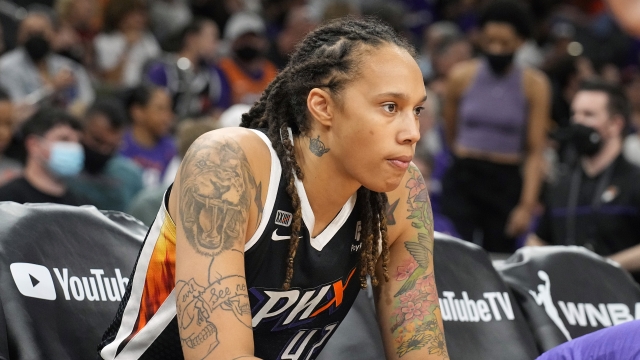 The WNBA star was detained in February at a Moscow airport when authorities reportedly found vape cartridges containing oil derived from cannabis.

The U.S. State Department is escalating its efforts to bring Brittney Griner home from Russia.

The State Department is now officially classifying Griner's status under Russian custody as "wrongfully detained," which is a significant change that brings more U.S. government involvement.

"We have determined that the Russian federation has wrongfully detained U.S. citizen Brittney Griner," Price said.

The WNBA star was detained in mid-February after arriving at a Moscow airport when authorities reportedly found vape cartridges containing oil derived from cannabis in her luggage. It's an offense in Russia that carries a maximum penalty of 10 years in prison.

Griner's case has now been handed over to the State Department's office of the Special Presidential Envoy for Hostage Affairs. SPEHA, as it's known, works to negotiate the release of hostages and other Americans classified as being wrongfully detained in other countries. The office most recently played a role in facilitating Russia's release of former U.S. Marine Trevor Reed after three years, in exchange for a convicted Russian drug trafficker. This exchange has fans, teammates and family hoping a similar deal can be reached in Griner's case.

"Our hope is that she's back tomorrow. We remain hopeful this will come to resolution soon," Phoenix Mercury President Vince Kozar said.

Following Reed's release from Russia, Griner's wife, Cherelle, posted on Instagram that her heart is "overflowing with joy for the Reed family," and that she knows "the pain of having your loved one detained in a foreign country."

Griner's detainment and Reed's release has reignited debate over the U.S. government's efforts to bring Americans home, with many families and advocates saying more needs to be done.

"So we were happy to hear that Brittany Griner was classified as 'wrongly detained' and we are hoping that is change that will continue in the future, because this is extremely rapid. The United States government did not recognize my son as wrongfully detained for almost a complete year," Reed's father, Joey, said. "We need them to declare Americans wrongfully detained much quicker."

Griner's detainment has also sparked questions about the lower salaries of WNBA players that prompt them to find jobs overseas in the off season.

Dr. Courtney Cox, who has spent time with players overseas researching an upcoming book, says Griner's case has provided a glimpse into the complicated landscape international league players have long had to navigate.

"I think more than ever, there's more of us that are now made aware of what those risks are," Cox said. "But I think players have to weigh it in a way they've maybe always had to."

The WNBA season kicks off Friday. League Commissioner Cathy Englebert has announced Griner's initials and jersey number 42 will be featured on all WNBA courts.