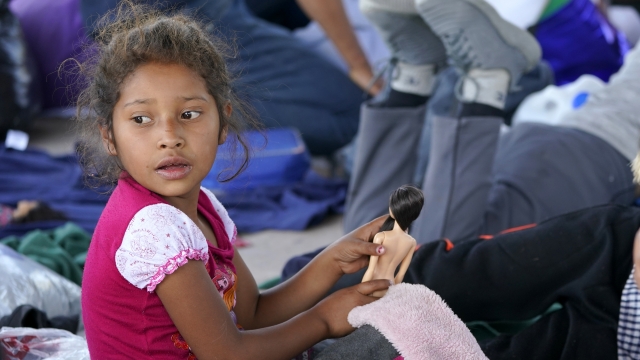 The U.S. wants to discuss root causes for the migrant surge and develop a plan.

White House officials are meeting with their counterparts in Mexico and Guatemala to discuss the migration crisis. They say they want to develop a plan to respond to the migrant surge and address its root causes like extreme violence and poverty.

New images from inside one Texas border facility where children are being detained after crossing the U.S.-Mexico border illegally by themselves were made public by a congressman in Texas.

The White House says most people arrested after crossing the border illegally are turned back to Mexico. But Press Secretary Jen Psaki says the U.S. has an obligation to a humane policy when it comes to children seeking asylum alone.

"Children presenting at our border who are fleeing violence, who are fleeing prosecution, who are fleeing terrible situations is not a crisis," she said. "We feel that it is our responsibility to humanely approach this circumstance and make sure they are treated and put into conditions that are safe."

The White House says it's running an ad campaign in Central America and Brazil to discourage people from making the risky journey saying the border is not open.

But critics say that message isn't getting through. They say that's why we see things like this exclusive Newsy video we showed you last week showing some migrants climbing over the border wall.

In a letter to the president, Republican Sen. John Cornyn and Democrat Kyrsten Sinema urge him to use his full power to respond to the crisis. They say communities and non-governmental organizations are already rising to the challenge, but the federal government needs to step up. They say "we cannot afford to be consumed by partisan battles on this critical topic," and pledge to work across the aisle to develop solutions.