Trump Restricts Immigration — But Not Temporary Visas — For 6 Nations 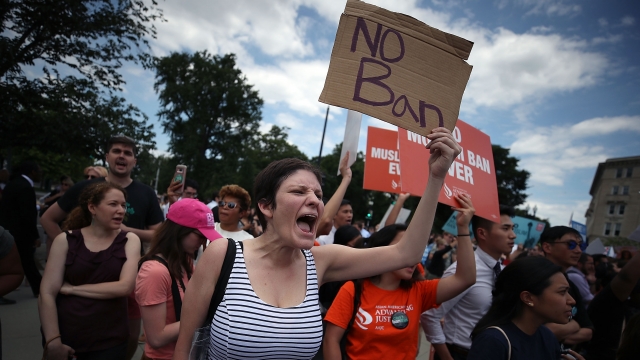 Unlike most of the countries already facing a travel ban, citizens from the newly added nations can still visit to the U.S. for business or pleasure.

People from Nigeria, Eritrea, Myanmar and Kyrgyzstan will be barred from getting U.S. immigrant visas. And people from Sudan and Tanzania can no longer participate in the visa lottery, which randomly grants green cards to people from countries with low levels of immigration to the U.S. Officials say some immigrants may qualify for exemptions.

But unlike most of the Muslim-majority countries already facing a travel ban, citizens from the newly added nations will still be allowed to travel to the U.S. with temporary visas for business or pleasure.

And the new rules may not have as big an impact as the original ban. In 2018, the six newly added countries were granted 13 times more temporary U.S. visas than permanent ones — so a cutback to immigrant visas probably won't be felt too much.

In contrast, the existing travel ban has dramatically reduced both visitors and immigrants from the impacted countries. In 2018, the total number of citizens from those countries receiving a visa was five times smaller than the total in 2016, before the ban was implemented.