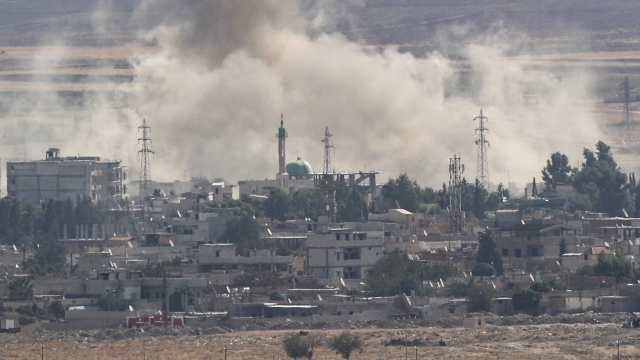 Analysts say Turkey is willing to face economic consequences to continue its offensive in Syria.

Turkey is ignoring U.S. sanctions as it continues its attack against Kurdish forces, which had been America's critical ally in combating the Islamic State in Syria.

President Trump, who pulled nearby U.S. troops to essentially clear the way for Turkey's military incursion, now threatens to "destroy" Turkey's economy over its actions.

And Volkswagen says it's hitting the brakes on plans to build a $1.4 billion factory in Turkey.

International observers say the sanctions and a business pullback from Turkey will indeed impact its economy but are unlikely to change its behavior.

The global intelligence firm Stratfor said this week: "Turkey's economy remains fragile enough that an external shock, such as U.S. sanctions, could severely damage it." But its analysis concluded: "Turkey is displaying its willingness to risk incurring sanctions in pursuit of national security objectives."

President Trump, facing intense criticism over his strategic decisions in Syria, now says he is trying to stop Turkey from "endangering civilians and threatening peace" while targeting its declared enemy, the Kurds. He warned that Turkish actions are "precipitating a humanitarian crisis and ... possible war crimes."

But on Tuesday, the Justice Department ramped up pressure with the filing of fraud and money laundering charges against Turkey's second-largest state bank. It is accused of violating U.S. sanctions against Iran.

That gives added significance to concerns being raised by German automaker Volkswagen, the world's largest carmaker. The company said it's pulling back from opening a second factory in Turkey. But it's not scrapping the project altogether or making changes at its other Turkish plant.

The company said in a statement Tuesday: "We are monitoring the situation carefully and are worried about the current developments."

But the Stratfor analysis says Turkish President Recep Tayyip Erdoğan will shift blame for any hardships felt by citizens by stoking nationalistic fervor over "economic warfare" waged on his country. He will likely assail "enemies at home and abroad."