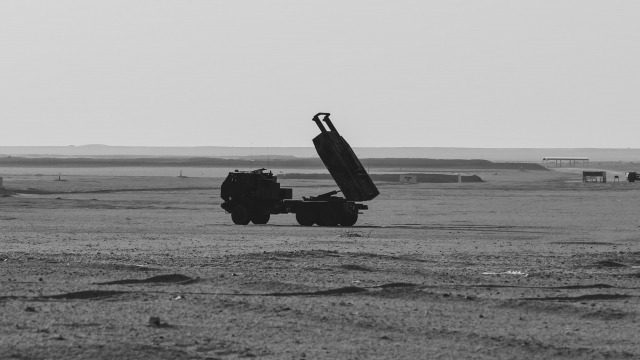 HIMARS are capable of striking targets 48 miles away, with rockets holding the explosive equivalent of 500-pound bombs.

It's the most advanced weapons system provided to Ukraine to date, called High Mobility Artillery Rocket Systems, or HIMARS.

HIMARS are capable of striking targets 48 miles away, with rockets holding the explosive equivalent of 500-pound bombs.

"It can fire dozens of rockets very quickly, whereas cannon artillery takes more time to get its effects on target," Center for Strategic and International Studies Senior Advisor Mark Cancian said. "It can attack before an adversary's artillery can pick up and move."

Russian artillery has caused most of the destruction in Ukraine. That's why Ukrainian leaders have been begging for systems to help neutralize that threat.

"They're also good when paired with some of the other systems that the Ukrainians have been getting," Cancian continued. "Drones, for example, which can spot artillery positions and the counter artillery radars that we've been providing when a Russian artillery unit fires — These radars can see where the shell is coming from, calculate where the control is coming from, and then Ukrainians can direct fire on that location."

The Kremlin's spokesperson responded to the news, saying "The U.S. is deliberately and diligently pouring fuel into the fire."

President Biden tried to lower the temperature in an opinion essay published in The New York Times Tuesday, writing: "We do not seek a war between NATO and Russia. As much as I disagree with Mr. Putin, and find his actions an outrage, the United States will not try to bring about his ouster in Moscow."

And the Pentagon says the Ukrainians pledged not to use HIMARS to fire into Russian territory.

"The Ukrainians have given us assurances that they will use this system for defensive purposes only," Undersecretary of Defense for Policy Colin Kahl said.