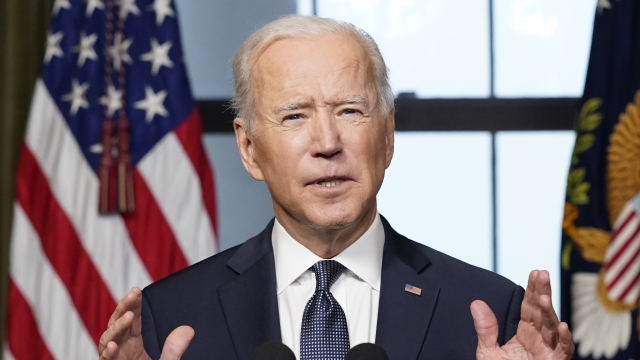 The president said the initial goals of responding to the Sept. 11 attacks, including the 2011 killing of Osama bin Laden, have long been met.

President Biden committing to completely pulling troops out of Afghanistan by Sept. 11.

"I'm now the fourth United States president to preside over American troop presence in Afghanistan: two Republicans, two Democrats. I will not pass this responsibility onto a fifth," Biden said.

Speaking in the same White House room where President George W. Bush first announced U.S. strikes in Afghanistan in 2001, President Biden said the nation's original goals of responding to the Sept. 11 attacks had long been met, including the 2011 killing of Osama bin Laden.

"War in Afghanistan was never meant to be a multi-generational undertaking. We were attacked, we went to war with clear goals. We achieved those objectives. Bin Laden is dead and Al-Qaeda is degraded in Iraq and Afghanistan," he said.

President Biden said he spoke to Bush ahead of announcing his plans to end a war that has cost the U.S. the lives of more 2,200 American troops and nearly $1 trillion and killed thousands of Afghan civilians.

Biden's plan breaks with the agreement the Trump administration negotiated with the Taliban for a full U.S. withdrawal by May 1.

As for the path forward, the president says plans for a military presence to keep the U.S. Embassy and American diplomats safe is in the works. He also noted what ending the war would mean for the government's focus on future security threats.

"We have to focus on the challenges that are in front of us. We have to track and disrupt terrorist networks and operations that spread far beyond Afghanistan since 9/11. We have to shore up American competitiveness to meet the stiff competition we're facing from an increasingly assertive China," he said.

In the future, President Biden added the U.S. will focus more on diplomacy and will continue to hold the Taliban accountable.

"We will keep providing assistance to the Afghan national defenses and security forces, along with our partners," he said. "And we'll continue to support the rights of Afghan women and girls by maintaining significant humanitarian and development assistance."

Shortly after his remarks, the president visited Arlington National Cemetery to honor those who paid the ultimate sacrifice in America's most recent conflicts.

"We're absolutely united in our respect and support for the valor, courage and integrity of the women and men of the United States armed forces who served," President Biden said.

Following the president’s announcement, NATO also said it would pull its troops -- about 7,000.