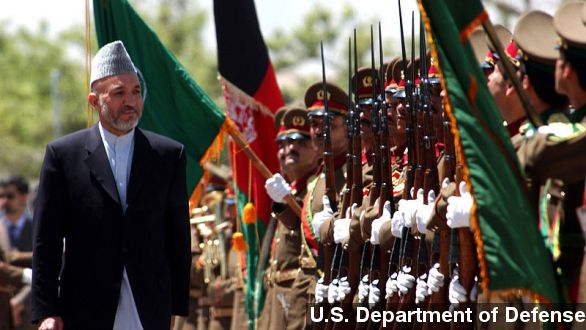 Time is running out for Hamid Karzai to sign off on a key security deal with the U.S., but the Afghan president appears more defiant than ever. In turn, American officials are raising the stakes. (Via U.S. Department of Defense)

The current deal on the table would allow about 8,000 U.S. troops to stay in the country past the 2014 withdrawal deadline. Now, total U.S. troop withdrawal may be an option. (Via PBS)

This, after a council of Afghan elders overwhelmingly endorsed the plan over the weekend. And just when it seemed the deal was all said and done, Karzai stunned the U.S. by announcing he wanted more time. (Via Press TV)

"We will fix our agreement and continue our negotiations on it with America." (Via Fox News)

Then in a meeting with National Security Advisor Susan Rice, Karzai reportedly said he would not put his name on the bilateral security agreement until several conditions were met first. (Via MSNBC)

That includes the U.S. helping his government in peace talks with the Taliban, the release of Afghan detainees from Guantanamo Bay and a guarantee U.S. forces will no longer enter Afghan homes. (Via NBC)

Unless the U.S. meets those demands, Karzai says he’ll leave it to his successor to handle after presidential elections are held in April. So what happens then?

According to a summary of the meeting released by the White House, "The U.S. would have no choice but to initiate planning for a post-2014 future in which there would be no U.S. or NATO troop presence in Afghanistan.”

The New York Times writes total U.S. troop withdrawal could also put crucial aid commitments in jeopardy: "Afghanistan is decades away from self-sufficiency — it currently covers only about 20 percent of its own bills, with the rest paid by the United States and its allies." (Via The New York Times)

So why risk that? Some of Karzai's critics say he's more concerned about the legacy he’s leaving behind — fearing some at home might see him as putting U.S. interests ahead of Afghanistan's. Karzai's main challenger in the 2009 elections told CNN why he thinks the negotiations are at a standstill.

DR. ABDULLAH ABDULLAH: " Primarily because of the personal feelings or personal interests of President Karzai."

Several other NATO countries, most notably Germany, have warned they too could pull out their forces if Karzai doesn't sign the deal.