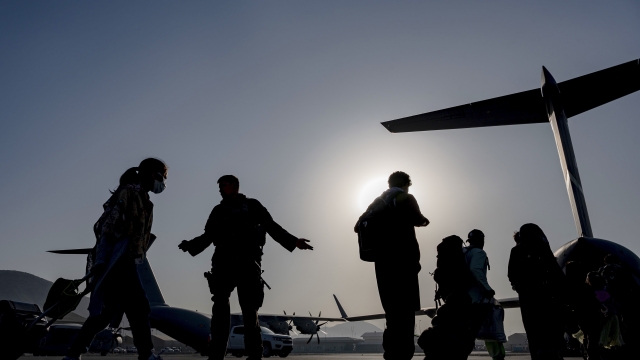 President Biden says he is keeping his deadline in place for U.S. troops to pull out of Afghanistan in seven days.

U.S. President Joe Biden declared Tuesday he is sticking to his Aug. 31 deadline for completing a risky airlift of Americans, endangered Afghans and others seeking to escape Taliban-controlled Afghanistan. The decision defies allied leaders who want to give the evacuation more time and opens Biden to criticism that he caved to Taliban deadline demands.

“Every day we’re on the ground is another day that we know ISIS-K is seeking to target the airport and attack both us and allied forces and innocent civilians,” Biden said at the White House, referring to the Islamic State group's Afghanistan affiliate, which is known for staging suicide attacks on civilians.

He said the Taliban are cooperating and security is holding despite a number of violent incidents. “But it’s a tenuous situation,” he said, adding, “We run a serious risk of it breaking down as time goes on.”

The United States in recent days has ramped up its airlift amid new reports of rights abuses that fuel concern about the fate of thousands of people who fear retribution from the Taliban and are trying to flee the country. The Pentagon said 21,600 people had been evacuated in the 24 hours that ended Tuesday morning, and Biden said an additional 12,000 had been flown out in the 12 hours that followed. Those include flights operated by the U.S. military as well as other charter flights.

Biden said he had asked the Pentagon and State Department for evacuation contingency plans that would adjust the timeline for full withdrawal should that become necessary.

Pentagon officials expressed confidence the airlift, which started on Aug. 14, can get all Americans out by next Tuesday, the deadline Biden had set long before the Taliban completed their takeover. But unknown thousands of other foreign nationals remain in Afghanistan and are struggling to get out.

The Taliban, who have wrested control of the country back nearly 20 years after being ousted in a U.S.-led invasion after the 9/11 attacks, insist the airlift must end on Aug. 31. Any decision by Biden to stay longer could reignite a war between the militants and the approximately 5,800 American troops who are executing the airlift at Kabul airport.

In Kabul, Taliban spokesman Zabihullah Mujahid told a news conference the U.S. must stick to its self-imposed deadline, saying “after that we won’t let Afghans be taken out” on evacuation flights. He also said the Taliban would bar Afghans from accessing roads to the airport, while allowing foreigners to pass in order to prevent large crowds from massing.

At the Pentagon, spokesman John Kirby said Aug. 31 leaves enough time to get all Americans out, but he was less specific about completing the evacuation of all at-risk Afghans. He said about 4,000 American passport holders and their family members had been evacuated from Kabul as of Tuesday.

“We expect that number to grow in coming days,” Kirby said.