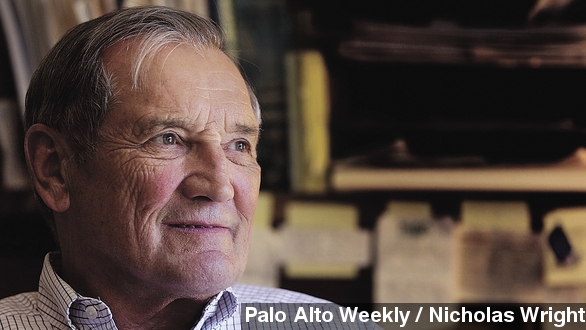 For the first since he was detained over a month ago, North Korea has confirmed it's holding an 85-year-old American veteran on war crimes.

It's accusing Korean War veteran Merrill Newman of "hostile acts" against the state and ordering the deaths of North Korean soldiers and civilians. (Via KRON)

RT quotes North Korean state media as saying Newman "masterminded espionage and subversive activities against the DPRK and in this course he was involved in killings of service personnel of the Korean People's Army and innocent civilians."

Newman was detained more than a month ago when he was in the country for a 10-day tourist visit. North Korean authorities pulled him off the plane from Pyongyang to Beijing just before takeoff. (Via Al Jazeera)

His family has since appealed for his release, pointing out he only had enough medication for his heart condition to last his short trip.

According to The New York Times, his apology read, in part: "If I go back to U.S.A., I will tell the true features of the DPRK and the life the Korean people are leading."

It's unclear what purpose the video was meant to serve, and as some observers have pointed out, North Korea has been accused before of coercing statements from detainees.

"Is this a prelude to some sort of conviction the North Korean officials will announce? Or perhaps is it a prelude to some kind of a pardon? The big question, could Mr. Newman soon be on his way home?" (Via CNN)

The BBC points out "Newman's alleged confession could allow North Korea to release him without formal legal proceedings."

The State Department did not immediately comment on this latest development.