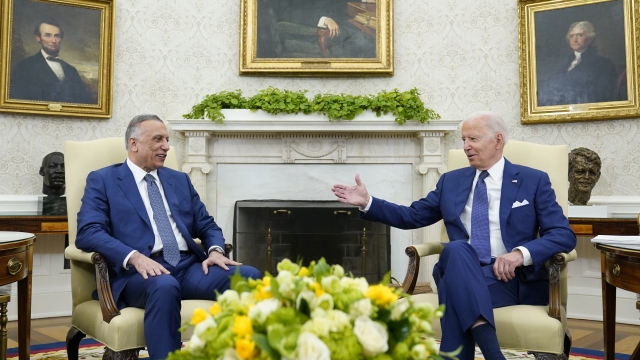 “We’re not going to be, by the end of the year, in a combat mission," President Biden said.

U.S. troops in Iraq will now shift to an advisory only role by the end of 2021. President Joe Biden and Iraqi Prime Minister Mustafa al-Kadhimi announced the agreement at the White House on Monday, ending U.S. combat operations. President Obama sent troops back to Iraq in 2014, to fight ISIS.

It’s just the latest evidence of how the Biden administration is shifting its focus away from longstanding military conflicts, focusing on other areas—like China.

“Our shared fight against ISIS is critical to the stability of the region, and our counter-terrorism operation will continue even as we shift to this new phase we’re going to be talking about," Biden said.

A senior administration official told the Associated Press the U.S. believes Iraqi security forces are up to the task to defend their country but the official noted that Islamic State terrorists remains a threat in the region. The group has claimed responsibility for the recent bombing of a Baghdad area market that killed at least 30 people.

In an interview, the Iraqi Prime Minister said he wants the Americans to support his forces... and help develop their capabilities. The Prime Minister is under intense domestic pressure to remove all U.S. troops.

About 2,500 U.S. troops remain on the ground in Iraq and it’s unclear how many will stay behind after the end of the year.