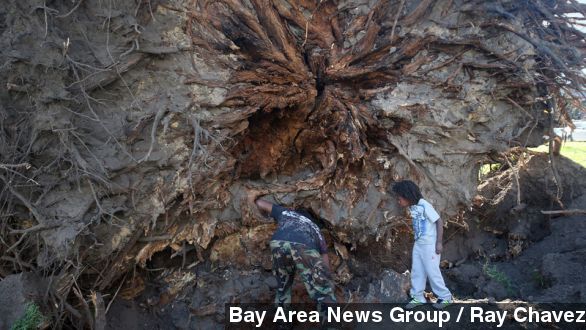 Eight people have died strong winds, heavy snow and rain, and cold temperatures grip much of the West and Southwest.

A strong winter storm in the Western U.S. has killed at least eight people in a combination of wicked winds, heavy snow and cold temperatures.

The severe weather started Thursday when winds of up to 60 miles per hour packed a punch on the San Francisco Bay area. Two people died in Oakland because of the storm. (Via KRON)

Then the storm moved south. KCBS reports at least one southern California ski resort is opening early because of all the extra snowfall on the mountain. The storm dumped about a foot of snow before making its way out. (Via KCBS)

And now the windy and wintry conditions are making their way through states like New Mexico, Oklahoma and even Texas. (Via NBC)

The weather is being blamed for causing Willie Nelson's tour bus to crash in North Texas just after 3:00 Saturday morning. Nelson was not on the bus, but fellow band mates said the roads were icy — one of them suffered a broken hip. (Via KHOU)

Conditions are so bad in Texas more than half the state has been placed under a winter storm warning including major cities like Dallas and Austin.

Those southern states known for having warmer winters are facing the threat of snow because cold Canadian air has forced its way south. Temperatures in the 20s are now being reported as far south as Arkansas and New Mexico. (Via The Weather Channel)

While snow is a major threat from this storm so is heavy rain. In California, a helicopter had to rescue at least five people from flash flooding. (Via WNBC)

WFTS reports while clean up has begun in several western states, people along the eastern seaboard will have to deal with storm conditions Wednesday, just in time for millions of Thanksgiving travelers.

METEOROLOGIST: "Bad travel possibly here in the Atlantic coast states because of both snow and windy rain for the Southern Appalachians, the Carolinas, all the way up into New England."

According to The Weather Channel, the heaviest hit areas in Utah and Colorado have gotten a whopping 25 inches of snow. It forecasts the storm could drop up to a foot of snow in the Appalachians.