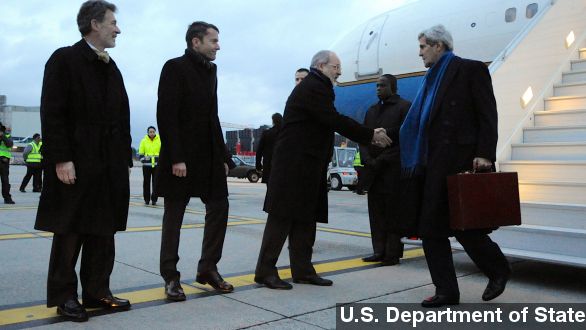 Negotiators from Iran and from Western powers agreed to a six-month deal about Iran's nuclear program, breaking a decade of diplomatic stalemate.

"While today's announcement is just a first step, it achieves a great deal. For the first time in nearly a decade, we have halted the progress of the Iranian nuclear program." (Via NBC)

The six-month temporary agreement requires Iran to get rid of its stockpiles of near weapons-grade 20 percent enriched uranium and limit its enrichment to no more than 5 percent. In return, the country will receive $6-7 billion worth of sanction relief. (Via The New York Times)

The announcement comes after three rounds of negotiations between Iran and Western powers. The U.S. and its allies want to prevent Iran from acquiring nuclear weapons, while Iran wants relief from crippling economic sanctions. (Via BBC)

U.S. Secretary of State John Kerry flew into Geneva Friday to join the discussions along with several other high-level foreign ministers, raising hopes that a deal would finally be signed. (Via CBC)

The deal was announced on Twitter by Iran's foreign minister and by a spokesman for the E.U. (Via Twitter / @JZarif, @EUHighRepSpox

Delegates had to overcome several significant differences from both sides. A CNN correspondent says a crucial sticking point for negotiators was language giving the country the right to enrich uranium.

"You know that in Iran, the tremendous emotional and political importance of a recognized right to enriched uranium. But you also know from the Western side, from the American side, that they don't believe that right exists."

And the deal has faced vigorous opposition from U.S. allies Israel and Saudi Arabia, which have criticized the agreement as overly generous to a deadly threat in the region. (Via Fox News)

Over the next six months, diplomats from both sides will be working to construct a more comprehensive settlement about Iran's nuclear program.