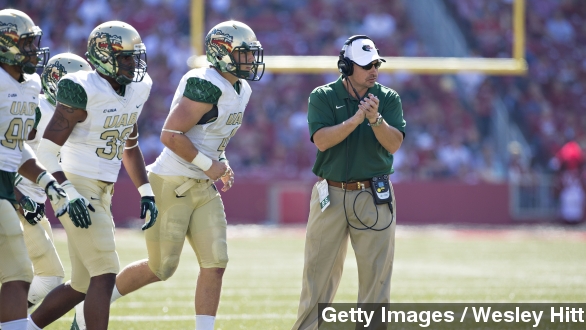 UAB will become the first FBS team in nearly 20 years to be shut down, despite being bowl-eligible this season.

The University of Alabama-Birmingham football team became bowl-eligible over the weekend, finishing 6-6 on the season — a record considered by many to be a huge turnaround from previous seasons.

But Tuesday, the football team and athletic staff found out this season will be their last. UAB announced it's shutting down the football program — making it the first Football Bowl Subdivison, or FBS, team to do so in nearly 20 years.

"I hate that we're going through this. It's like a death," head coach Bill Clark said to reporters.

UAB President Ray Watts made the announcement Tuesday, citing financial reasons as a part of the decision to nix the program. An additional $49 million would've been needed to sustain a competitive football team.

"A lot of people have said over the last couple of weeks what we should do. But nobody has written any checks to make up whatever difference you have," Watts said during the announcement.

The decision wasn't exactly a surprise. The football team had been trying to garner support since earlier in the season when athletic boosters raised concerns that the program could be shut down.

The UAB football team has not played in a bowl game since 2004, and in those intervening years they haven't performed particularly well. Although they were 6-6 this season, The Blazers only picked up five wins in their previous two seasons combined.

But a few reports say the decision to axe the program goes deeper than just money or a lackluster record. ESPN reports UAB "doesn’t have its own board of trustees and is controlled by the University of Alabama System board, which oversees campuses in Birmingham, Huntsville and Tuscaloosa."

Thirteen of the 15 trustees graduated from the University of Alabama in Tuscaloosa, including Paul Bryant, Jr. — son of legendary Alabama football coach Paul "Bear" Bryant.

According to AL.com, some believe the younger Bryant has been trying to get rid of UAB's program because of some personal vendetta. Bryant's never commented on those claims.

The school also announced Tuesday it would be shutting down its bowling and rifle teams. As far the UAB football players, they're eligible to transfer to other programs for free. Those players will also meet to decide whether they will play in a bowl game.

This video includes images from Getty Images and mosesxan / CC BY NC SA 2.0.