Uber CEO Warns Service Could Halt In California Until November 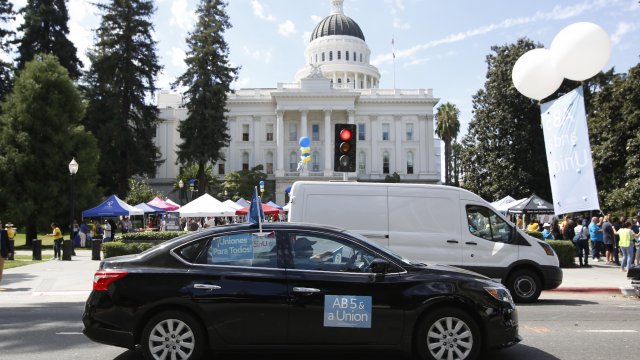 If forced by the state to classify drivers as employees, the company says it could take months to switch to a full-time employee model.

Uber could temporarily shut down in California if the company is forced to classify drivers as employees, arguing it would take months to switch to a full-time employee model.

“We’ll have to essentially shut down Uber until November,” Uber CEO Dara Khosrowshahi said on MSNBC.

Khosrowshahi said Wednesday that Uber will appeal a court ruling handed down earlier this week that requires the reclassification.

California Attorney General Xavier Becerra brought the lawsuit against Uber and rival Lyft back in May. He claims the ride-hailing companies are evading a state law, called AB5, by classifying drivers as contractors instead of employees — a move that saves each of them millions of dollars annually.

“Uber and Lyft try to present a false choice. You don’t have to give up those rights and those benefits to have flexibility,” Becerra said in an interview on CNBC.

In response, Uber is putting its support behind Proposition 22, which will be on the ballot for California voters in November. If enacted, it would grant an exemption to AB5 for gig companies. Uber claims it’s a crucial step in ensuring that drivers get to keep the flexibility they enjoy. Becerra says otherwise.