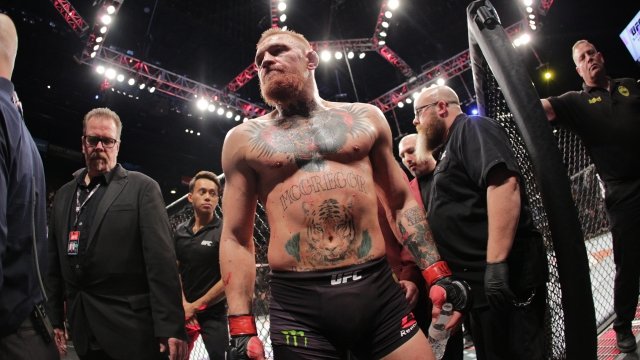 McGregor turned himself in Thursday after UFC says he attacked other fighters.

Conor McGregor is now a former UFC champion. The Ultimate Fighting Championship has officially stripped him of his lightweight belt.

UFC president Dana White made the move official at a press conference late Saturday night following a UFC pay-per-view event. He said Khabib Nurmagomedov, who won his bout over Al Iaquinta that night, is the new lightweight champ.

The announcement came a couple days after McGregor turned himself in to police after the UFC says he and his entourage attacked a bus carrying fellow fighters at a pre-fight media day. The Irish fighter was released on bail and has a court date in June.

McGregor was probably going to lose his belt anyway, though. He hasn't defended his title since he won it in November 2016. The only fight he was in since then was his boxing match with Floyd Mayweather last August.