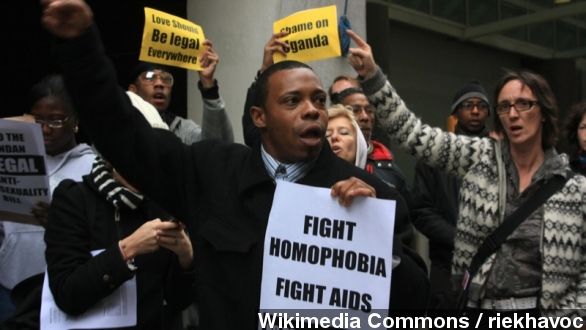 According to a spokesperson, the majority of the members of Parliament approved the controversial bill Friday, and it now must go to President Yoweri Museveni for approval. (Via Sky News)

Homosexuality was already illegal in Uganda, but this new law makes the punishment for gay acts even tougher and even makes the promotion of homosexuality and failure to report it a crime.

The original wording of the bill would have given the death penalty to anyone caught engaging in homosexual acts with a minor or if someone involved was HIV positive, but that section wasn't included in the version approved Friday. (Via International Business Times)

According to the BBC, the prime minister was against the vote because he said there weren't enough members of Parliament there.

But David Bahati, the man behind the new law, reportedly called the approval a victory against evil. (Via MSNBC)

Many world leaders, including President Obama, have expressed their disapproval for the bill since it was proposed back in 2009.

"Surely we can agree that it is unconscionable to target gays and lesbians for who they are, whether it's here in the United States or more extremely in odious laws that are being proposed most recently in Uganda." (Via The White House)

The vote comes just a day after Uganda's government passed another shocking law that bans miniskirts and any other clothing that is thought to be "sexually explicit." (Via Daily Monitor)

The anti-pornography bill, which is being regarded as a threat to women's rights, outlaws anything that shows sexual parts of a person, including breasts, buttocks and even thighs.

And critics say its enforcement will result in the ban of programming that depict performers wearing provocative clothing from the country's television. (Via The Independent)