UK Elections: Hung Parliaments And How To Fix Them 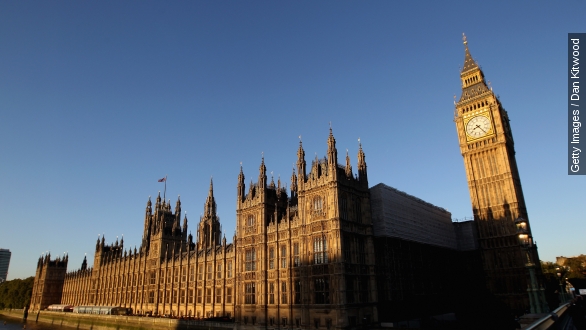 The U.K. parliamentary elections are around the corner, and it's looking like they won't end with a clear winner. What happens next?

It's election season in the U.K., and most polls say the country is heading for a hung parliament.

University College London professor Robert Hazell explains, "A hung parliament is one in which there is no clear outcome to the election. … If one party doesn't gain 325 seats or more, it won't have an overall majority."

After Britain votes on May 7, party leaders will have to form a new government. Here are their options.

During the BBC's opposition debate, moderator David Dimbleby said "I should state the obvious, Ed Miliband, which is that you are aiming for an overall majority. So save us that bit, and answer the question."

Right now, there are only two men in Britain who have a shot at becoming the next prime minister: Labour's Ed Miliband from the left and Conservative's David Cameron on the right.

Both leaders are campaigning for their party to win a majority of seats in the House of Commons, so they can run the new government all by themselves.

But at this point, both parties would need to pull off an electoral miracle to win the majority. It's more likely they'll have to cut a deal.

If you can't beat 'em, join 'em. Smaller parties can help push big parties past the majority threshold by forming a coalition in exchange for influence.

This happened in 2010, when the Conservatives teamed up with the Liberal Democrats to form the majority. They voted together and shared similar priorities.

Cameron told Clegg during the ITV debated, "Nick, I defend all the decisions we took, and I think your pick-and-mix approach isn't…"

Clegg interrupted him, protesting, "No, no, no, no."

Lib Dem leader Nick Clegg is still pushing for coalition. But the party’s lost support and may not win enough seats to make up the difference on election day.

Other coalition options are less appealing: the Scottish National Party could give Labour ample seats, but Miliband is not eager to cozy up to the party behind last year's independence referendum in Scotland.

Cameron could turn to far-right parties like UKIP for support, but stark differences between the parties on issues like immigration and EU membership make collaboration unlikely.

Compromise isn't popular in politics, and several party leaders have already ruled out coalition arrangements. That doesn't necessarily mean they won't strike a deal, though.

A parliamentary government can be run by a minority party, which secures support for two crucial votes — confidence in the government and supply of cash.

Minority rule makes it much harder to pass laws. The leading party has to secure support vote by vote. But it does come with fewer strings attached than a coalition.

Australia and New Zealand have been run by confidence and supply governments in the past. But it has never happened in the U.K. before.

One thing is clear: After the votes come in, the U.K.'s next government will be decided by politicians — not voters.

As one BBC correspondent put it, "The makeup of Parliament, its component pieces, that's what we control. In a hung Parliament, how the government is then constructed, who's in it, is out of our hands. And there's no guarantee we'll like the look of what we end up with."

This video includes images from Getty images and U.K. Parliament / CC BY ND 2.0 and music from Chris Zabriskie / CC BY 4.0.