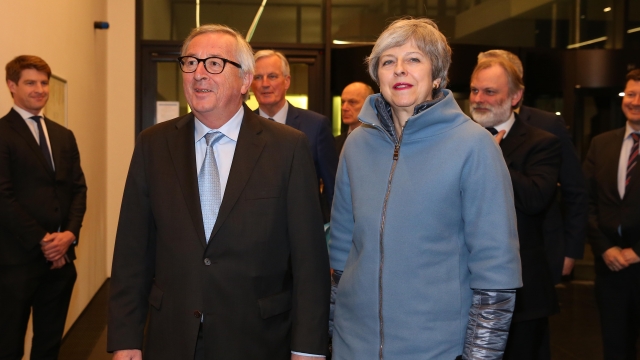 The U.K. parliament is holding a series of votes that could end up delaying the country's deadline to leave the European Union.

The U.K. parliament is taking a series of votes this week to figure out how — or even if — the U.K. will leave the European Union on time later this month.

U.K. Prime Minister Theresa May has scheduled another vote on the Brexit deal she's negotiated with the E.U. for Tuesday. The last time that agreement was up for debate, Parliament shot it down by a margin of 200+ votes.

Since then, May's government has been working to scrape up more support in Parliament, and secure some last-minute tweaks to the deal from the E.U. government. It's not clear if those efforts can overcome Parliament's strong opposition, but a narrower defeat might inspire May to stick to her guns and try to push the agreement through a third time.

If May's deal is defeated, Parliament then votes Wednesday on whether to rule out a no-deal Brexit. Leaving the E.U. without a transition plan could cause chaos in both the U.K and the E.U.

The U.K. government insists no-deal Brexit can't be ruled out without weakening the country's negotiating position. But trying to whip members of parliament to vote for that option could be politically toxic.

Finally, if all other votes fails, Parliament will get to vote on pushing back the Brexit deadline by a few months. It's not clear more time will be able to resolve the difficulties around a Brexit agreement, but this is likely to be the most palatable option to vote for.

Any Brexit delay still has to go through the European Parliament before it becomes official. Without an extension, the U.K. leaves the European Union on March 29 — less than three weeks from now.