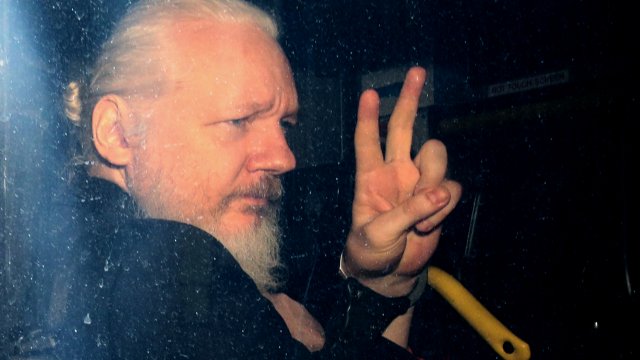 His sentence is just shy of the maximum allowed for violating bail in the U.K.

Assange was arrested last month at the Ecuadorian Embassy in London after Ecuador revoked his asylum.

Assange had been living in the embassy since 2012. He was avoiding extradition to Sweden for sexual assault allegations, which were eventually dropped. But Sweden said one of the accusers has requested the probe be opened again.

Assange's lawyer said he violated bail because he was afraid if he were extradited to Sweden, he'd also be extradited to the U.S. and potentially sent to Guantanamo Bay. Assange told the court he did what he thought was best at the time.

He faces conspiracy charges in the U.S. stemming from when WikiLeaks published thousands of classified documents provided by former U.S. intelligence officer Chelsea Manning back in 2010. If convicted, Assange faces a maximum penalty of five years in prison.

Assange pushed back against U.S. extradition at a hearing on Thursday. His next hearing will be May 30, and a "more substantive" one will be held June 12.