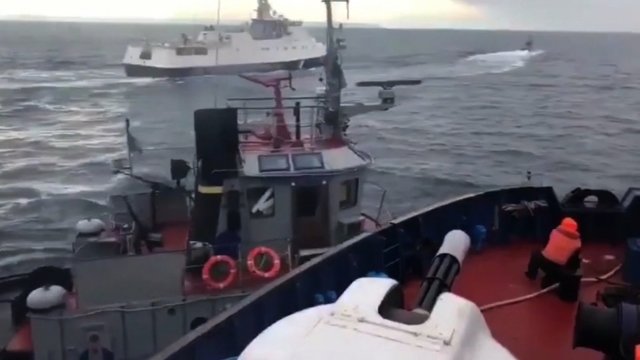 The confrontation started when two Ukrainian gunboats and a tugboat tried passing through the Kerch Strait to the Sea of Azov.

Ukraine has declared martial law after Russia seized three of its naval vessels off the coast of the Crimean Peninsula on Sunday.

The measure will last 30 days and only impact regions along the Ukrainian-Russian border, a section of the Ukrainian-Moldovan border and the coast of the Black Sea and the Sea of Azov.

Let's take a step back: It all started when two Ukrainian gunboats and a tugboat tried to pass through the Kerch Strait on Sunday. For perspective, the Strait is an important shipping route for several Ukrainian port cities, but it runs by Crimea, which Russia annexed in 2014.

When the three Ukrainian naval vessels tried crossing through the Strait under a bridge, they found the path blocked by a Russian tanker. Ukraine says Russians tried to intercept the vessels and rammed the tugboat. Several Ukrainian crew members were reportedly injured at some point during the fray.

Russia says the Ukrainian vessels were in its waters illegally, but Ukraine says it has a right to use the Strait and told Russia it planned to pass through.

Things have been tense between Ukraine and Russia for a while now. And Russia has begun inspecting all ships going to and from Ukrainian ports, even though a 15-year-old treaty between the two countries says the Kerch Strait and Sea of Azov are shared waters.

On Monday, the Ukrainian president suggested the country implement martial law. At the time, critics raised concerns that the action would allow Poroshenko to postpone Ukraine's presidential election set for March, which he's reportedly unlikely to win. But Ukraine's government confirmed the election is still scheduled for March 31.

And a NATO spokeswoman said Monday the organization is monitoring developments in the Sea of Azov and the Kerch Strait and called for de-escalation. She also said: "NATO fully supports Ukraine's sovereignty and its territorial integrity, including its navigational rights in its territorial waters."