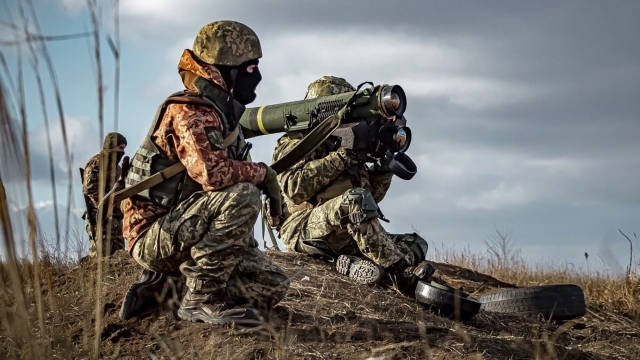 Russia's advanced hardware is adding to a military imbalance between Russia and Ukraine that was already severely lopsided in Russia's favor.

If Russia were to invade Ukraine, it could bring with it weapons designed for domination of the air and ground.

As of now, the country isn't hiding the military it’s amassing. Tanks are being moved by the trainload to areas near the border with Ukraine. Some of those tanks are believed to be equipped with advanced, defensive counter-measures to avoid being destroyed by enemy missiles. Russia might also deploy its new mobile, robotically controlled artillery gun designed to defeat enemy anti-tank weapons.

Russia hasn't said the model of these weapons it showed last week in Russia-allied Belarus, which shares a border with Ukraine. Joint Force Operations captured what appear to be images of mobile surface-to-air missiles in Belarus that could be used to shoot down Ukrainian aircraft.

All this hardware is adding to a military imbalance between Russia and Ukraine that was already severely lopsided in Russia’s favor.

Western countries are countering the Russian deployments with what the U.S. Embassy in Ukraine described as 200,000 pounds of "lethal aid."

On ABC News "This Week," Democratic Sen. Chris Coons of the Foreign Relations Committee said $650 million in military assistance was delivered to Ukraine in the past year, and just this week, another $200 million in ammunition, small arms, Javelin missiles — lightweight, portable missiles primarily used to target armored vehicles — and stinger missiles are being delivered. Sen. Coons says close NATO allies, like the United Kingdom, Poland, Czechoslovakia and France are also delivering material as well.

And Estonia, Latvia and Lithuania have announced they will be providing Ukraine with anti-aircraft and anti-tank missiles.

But even with this military aid streaming into Ukraine, a full-scale, tank-led invasion of Ukraine by Russia — using its most advanced, battle-hardened tanks — would be a tall feat to repel.

Given its clear military inferiority, Ukraine could not prevent Russian forces from invading, but with help from the United States and others, Ukraine might deter Russian President Vladimir Putin from acting if he were convinced the costs would be too high.

The troops are prepared for potential deployment to Europe as Russian President Vladimir Putin has yet to de-escalate military pressure on Ukraine.