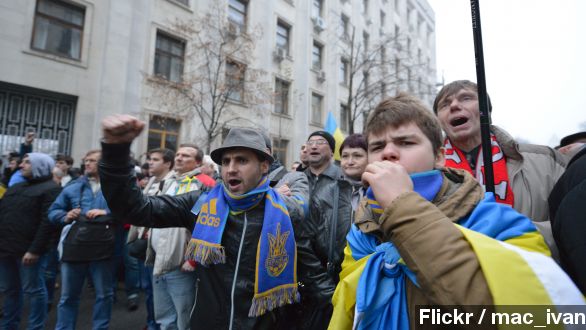 Ukrainian riot police forcibly broke up protests after the country's president rejected a trade deal with the European Union.

Tens of thousands of protesters converged in Kiev's Independence Square Friday evening in support of a far-reaching trade agreement between Ukraine and the European Union. The Ukrainian government backed out of that deal days before they were scheduled to sign it. (Via Euronews)

Several hundred protesters were still in the square at 4:30 a.m., when police moved in with riot shields and clubs. Protesters claim several dozen people were kicked and beaten by police, while authorities say the crowd hurled items at officers. (Via ITN)

The violence drew condemnation from the U.S. State Department, which urged Ukraine's leaders to "respect their people's right to freedom of expression and assembly. ... Violence and intimidation should have no place in today's Ukraine."

The tension centers around Ukrainian president Viktor Yanukovich's last-minute cold shoulder to EU advances. The trade pact Yanukovich recently rejected was in the works for five years, and was meant to provide the Ukraine some much-needed economic relief. (Via BBC)

The collapse of that deal is seen as a victory for Russian president Vladimir Putin, who has been competing with the EU for influence over former Soviet republics like Ukraine. The New York Times notes crippling trade sanctions imposed by Russia likely influenced Yanukovich's snub.

A writer for The Economist notes a lack of economic incentive has made Yanukovich unwilling to end the power struggle between the EU and Russia. "Though nothing is ever final in Ukraine, Mr Yanukovych’s favoured option seems to be to preserve the status quo and refrain from joining either camp while continuing to milk both."

It's also a big blow for Yanukovich's ex-rival Yulia Tymoshenko, Ukraine's former leader who was imprisoned for abuse of power after she lost the 2010 election. Tymoshenko has long been seen as a political prisoner by the West, and her release to Germany for medical care was a precondition of the EU trade deal. (Via The Telegraph)

Yanukovich's reversal has put him in in all kinds of unpleasant foreign policy situations, from awkward conversations with German Chancellor Angela Merkel ...

"We see you here, but we ... we expected more." (Via YouTube / President of Lithuania)

... to outright condemnations from the EU's president.

"We have to set aside short-term political calculations and we may not give in to external pressure, not the least from Russia." (Via RT)

But a Foreign Policy writer says Yanukovich's biggest concerns now come from Moscow. Having staved off the EU's approaches, Russia is now likely to pressure Ukraine into joining Russia's own trade union — and Yanukovich's cave on the EU deal might encourage more strong-arm tactics.

"He might soon find that Ukrainian exports to Russia are once again being mysteriously held up at the border. ... Absent real economic or political reform, he won't be able to turn to the EU or the [International Monetary Fund]. It could get pretty lonely in Kiev."

In place of the rejected trade deal, Yanukovich has proposed trilateral talks between the E.U., Russia and Ukraine. EU leaders have so far rejected that proposal.