Ukraine's New Rocket Systems Appear To Be Setting Russia Back 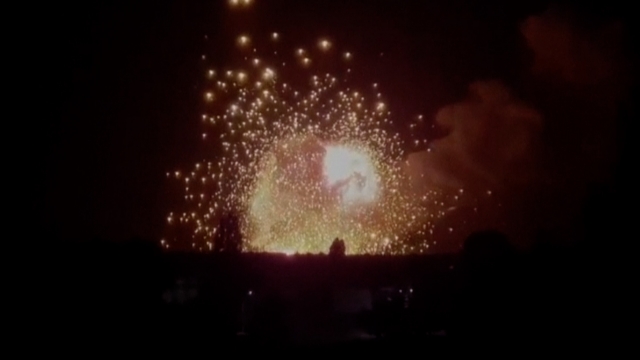 HIMARS, the U.S.-provided rocket system, is the star player as Ukraine for the first time hits Russia where it hurts.

It's an image emblematic of a new narrative: Highly accurate, long-range weaponry provided to Ukraine by the West, now taking center stage and changing the battlefield.

HIMARS, the U.S.-provided rocket system, is the star player as Ukraine, for the first time, hits Russia where it hurts — their stores of shells and rockets.

Phillips O'Brien is a professor of strategic studies at The University of St. Andrews.

"If the Ukrainians can keep destroying Russian ammunition before it can be fired, that's by far one of the most effective things they can do," O'Brien said.

O'Brien, a leading expert on war strategy, took a close look at Ukraine's HIMARS attack this week on a Russian weapons depot.

Kherson, an important port on the Dnipro River that flows into the Black Sea, fell to Russian forces on the first day of the invasion.

And the results were dramatic. Russian TV said the attack blew out windows within a mile radius of the blast, suggesting that Ukraine's rocket hit the bullseye of a massive store of Russian ordinance.

Satellite images show what it looked like before the missile strike and after.

O'Brien, using geolocation tools, concluded the Russians put the depot in a shockingly obvious place for the Ukrainians to find and target.

It was located along a vital supply line: one of the Russian-controlled rail tracks, right next to the bridge where it crosses the Dnipro River.

"The Russian way of supply is pretty straightforward. It's based on sending things as far as possible by train, by rail, and then setting up a large depot and then sending trucks out. So the Ukrainians, in a sense, have to follow the rail lines," O'Brien said.

NEWSY'S JASON BELLINI: How come they're not doing a better job of protecting this ammo if indeed the Ukrainians are able to target it and attack it?

PHILLIPS O'BRIEN: Maybe they didn't expect the Ukrainians to be as effective with these systems as they have turned out to be. Another one is that the Russian military is a very top-down military with quite rigid systems. So actually changing their supply system is a very tricky thing to do in such a rigid hierarchical system.

A map from the Kyiv Independent shows how widespread Ukrainian attacks on weapons depots are becoming, including on the eastern front, where Russian artillery has pummeled the way for its army to slowly progress deeper into Ukraine. But that firepower advantage may be waning.

O'BRIEN: Basically, it started, I think, about July 9 or so. You started seeing a significant drop in Russian range fire. Now, they might have expended their stocks, but it's also, I think, likely, that the destruction of a lot of these depots is now trickling down to the actual weapons in the field that cannot be supplied in the way that they were supplied before. A weapon is only useful to the Russians if it has something to fire.

O'BRIEN: So the Ukrainians don't need the world's greatest intelligence to find them. By the way, they also are almost certainly getting human intelligence for the ones in Kherson. The Russians are operating in a city where the Ukrainians have the population on their side and the Ukrainians could be telling them exactly where this depot is. Plus, we assume they're getting NATO intelligence on where these systems are as well.

President Volodymyr Zelenskyy is trumpeting how Western weapons, HIMARS in particular, are changing the equation.

"The occupiers have already felt very well what modern artillery is," Zelenskyy said. "And they will not have a safe rear anywhere on our land, which they occupied."

O'BRIEN: These are still a small number of HIMARS that are in the field.

BELLINI: Eight of them.

O'BRIEN: Yeah. I mean, it's a really small amount. On their own, that's not enough to probably change the course of the war. But it does show that if you give them a significant number of these, they can do a huge amount of damage. And right now, the Russians don't have or have not manifested an ability to deal with it. One of the reasons they're trying to get these Iranian drones to perhaps the Russians is to try and find one way to track the HIMARS because they're, I think, quite worried about what they mean.