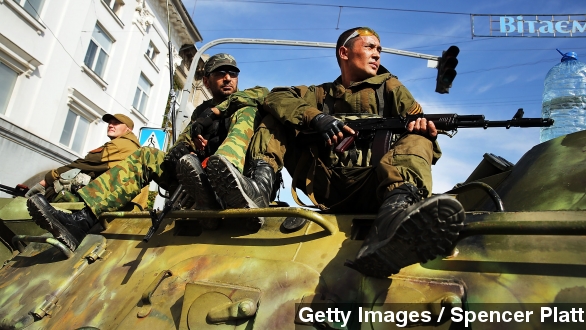 Ukraine has exchanged prisoners with pro-Russian rebels, but that's just about the only positive sign from the region.

The fighting in eastern Ukraine has calmed down in recent weeks, but there are still tensions.

Let's start with the good news — the Ukrainian government has exchanged prisoners with the pro-Russian rebel groups that have been battling the government in the country's east for months.

The swap reportedly took place Friday night, outside the rebel-held city of Donetsk. According to an RT reporter, Kiev swapped 222 prisoners in exchange for 145 of their captured soldiers.

There have been several mass prisoner exchanges ever since the two sides agreed to a fragile and often-violated cease-fire back in September. Before the swap, a leading negotiator estimated the separatists are holding about 600 soldiers, while Kiev has 400 rebels held captive.

Unfortunately, that prisoner exchange was about the only concrete agreement to come out of the latest round of high-level peace talks between Ukraine and the rebels. And those talks appear to be over.

Ukrainian and rebel leaders were scheduled to meet in the Belarus capital of Minsk Friday, to continue discussions opened Wednesday. But the negotiations were unexpectedly called off with no explanation.

Negotiators in Minsk previously orchestrated the September cease-fire, as well as another, more closely-observed truce signed in December. The latest talks were expected to help strengthen that truce, and possibly find an agreement to remove some heavy weapons from the battlefield.

The prolonged conflict is also having a dire effect on the region of Crimea, which has been increasingly isolated since Russia annexed it from Ukraine in March. Also on Friday, Ukraine's bus and train services separately announced they would no longer operate routes into or out of the region, citing security reasons.

Crimea has also suffered two widespread blackouts this week after Ukrainian authorities cut power supplies to the region, saying it had exceeded its consumption limit. Russian broadcaster NTV accused Ukraine of trying to "start a full-scale energy war" in Crimea.

The Ukrainian conflict has killed an estimated 4,700 people so far, according to the United Nations. About 1,300 of those deaths happened after the September ceasefire.