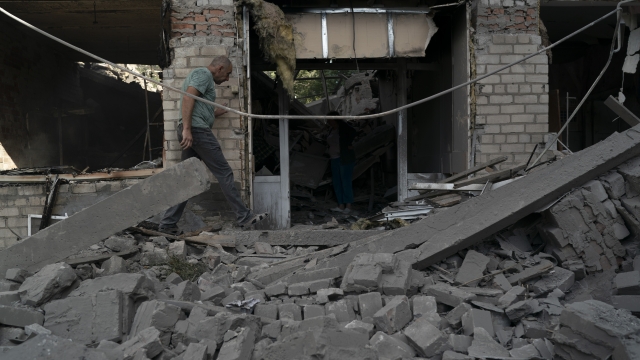 Ukrainian forces in the northeastern Kharkiv region have retaken portions of Russian-held territory there as a Ukrainian counteroffensive in the south has drained some of Moscow's resources in the area, according to a report released Wednesday.

Ukrainian forces in the Kharkiv region are "likely exploiting Russian force reallocation" to areas near the occupied city of Kherson in the south "to conduct an opportunistic yet highly effective counteroffensive" in the province, Washington-based think tank Institute for the Study of War said.

Vitaly Ganchev, the Moscow-backed mayor of the town of Kupiansk in a Russian-occupied area of the Kharkiv region, said Thursday that authorities had begun evacuating women and children from the town and nearby areas because of relentless Ukrainian shelling.

In his nightly video address on Wednesday, Ukrainian President Volodymyr Zelenskyy also reported success in the Kharkiv region but didn't provide details on its scope."This week we have good news from the Kharkiv region. You have probably already seen reports about the activity of Ukrainian defenders, and I think every citizen feels proud of our warriors," Zelenskyy said.

The gains came as Ukraine continued to mount a counteroffensive in the southern Kherson region, where the Ukrainian military is trying to retake territory from the Russians and has claimed the recapture of an unspecified number of towns.

Ukraine's ongoing operations near Kherson have forced Russian forces to shift their focus to the south, the Institute for the Study of War report said, enabling Ukrainian forces to launch localized but highly effective counterattacks near Kharkiv, Ukraine's second-largest city.

Zelenskyy's presidential adviser, Oleksiy Arestovych, also spoke of Ukrainian gains near Kharkiv late Wednesday, saying they would help disrupt supplies to Russian forces in the area and potentially lead to their encirclement.

Meanwhile, tensions continued to simmer around Europe's largest nuclear power plant where Ukraine and Russia have accused each other of threatening a nuclear disaster by shelling near the facility.

The towns of Nikopol and Marhanets, which face the Zaporizhzhia nuclear power plant across the Dnieper river, had come under Russian shelling overnight that left apartment buildings, a school, some industrial facilities and power lines damaged, said Valentyn Reznichenko, the governor of the Dnipropetrovsk province.

"The nuclear threat isn't abating because of Russia's mad actions and we need to consider all possible scenarios, including the worst one," Reznichenko said in televised remarks.

An in-depth special report on the Ukrainian President fighting to save his country.

The head of the U.N.'s International Atomic Energy Agency (IAEA), Rafael Grossi, has warned that "something very, very catastrophic could take place" at the Zaporizhzhia plant and urged Russia and Ukraine to establish a "nuclear safety and security protection zone" around it.

The fear is that the fighting could trigger a disaster on the scale of the Chernobyl disaster in Ukraine in 1986.

Ukrainian Deputy Prime Minister Iryna Vereshchuk urged residents of Russian-occupied areas near the power plant to evacuate, adding that Ukrainian authorities have urged the Russians to set up humanitarian corridors to evacuate local residents but received no response.

"The Russians are continuing to blackmail the Ukrainians and the entire world," Vereshchuk said. "The Russian state engages in nuclear terrorism, setting the first such precedent in the history of mankind."

Ukraine's Enerhoatom company that oversees the country's nuclear plants said that the Zaporizhzhia plant's workers were continuing repair works on Thursday to restore at least one of seven power lines to the plant, which has continued to operate with only one of six reactors operating to power the cooling system's pumps.

Enerhoatom's chief Petro Kotin said that the IAEA's proposals to improve safety at the plant can only be implemented if Russian troops leave and are replaced by a peacekeeping contingent.