Ukrainian Grain Is Being Stolen By Russia Amid The War 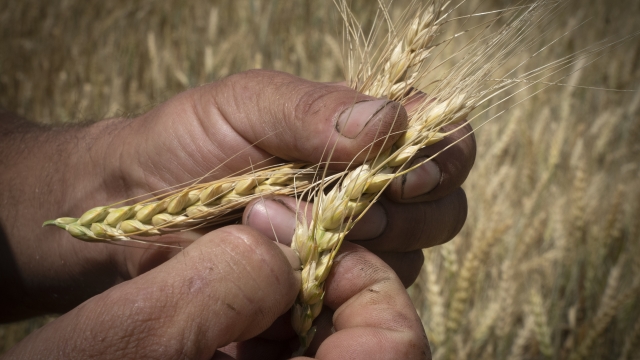 New satellite images show grain being loaded from silos to ships, then ferried across the Black Sea to countries willing to accept the stolen grain.

If you look carefully, you can see the Russian missile there on the right, moments before it blows up a Ukrainian grain silo far from the front lines.

Satellite images from June in the Ukrainian port of Mykolaiv show the before and after of Russian shelling of a grain storage terminal.

Even NASA satellites are documenting the Russian assault on Ukrainian agriculture, in this case capturing vegetable oil containers ablaze after a Russian airstrike.

As Russia sabotages Ukraine's ability to export its agricultural abundance, new details are emerging of how Moscow is simultaneously profiting from its takeover of some of the world's most productive farmland.

New NASA satellite images show that Russia has seized and occupied nearly a quarter of all of Ukraine's farmland.

From these areas, Russia is transporting the harvest to a port in Crimea.

New satellite images show it being loaded from silos to ships; they then ferry it across the Black Sea through the Bosphorus Strait in Turkey, and then on to countries willing to accept the stolen grain.

Also, with its control of Mariupol, Russia is able to export stolen grain through the sea of Azov, which connects to the Black Sea.

Ukrainian ships, however, could not leave due to a Russian naval blockade, and sea mines laid by Russia, according to U.S. Intelligence.

Since the start of the invasion, Ukraine has been unable to export 20 million tons of grain, much of it now rotting as Russia quietly finds customers.

Reuters reported on July 1 that Ukraine requested Turkey detain a Russian-flagged cargo ship carrying grain from a port near Mariupol.

But on Thursday, Ukraine's foreign affairs ministry said Turkey allowed the ship to continue on its way.

Geopolitics is having a cascading effect on global hunger.

David Beasley is the executive director of the World Food Program.

"Global price spikes in food, fuel and fertilizers that we're seeing as a result of the crisis in Ukraine threaten to push countries around the world into famine. The result will be global destabilization, starvation and mass migration on an unprecedented scale. We have to act and we have to act today to avert this looming catastrophe," Beasley said.

A major U.N. report released this week finds that, if this situation remains unchanged, 13 million more people will be undernourished this year as a direct result of the war.

Chase Sova is the senior director of public policy at World Food Program.

SOVA: Because of the compounding effects of conflict, climate change and COVID, all of this was really happening prior to the to the crisis in Ukraine and is causing us to have this year of catastrophic hunger.

NEWSY'S JASON BELLINI: What should we be looking for in the coming months?

SOVA: I don't think that we are going to see a quick resolution of conflict in Ukraine, which is the easiest way to sort of have this global food crisis level off.

That impact is already visible on the ground in countries like Somalia, which were already on the brink of famine. UNICEF is sounding the alarm.

"In the 15 countries most affected by the crisis UNICEF estimates that 8 million children under the age of 5 are suffering from severe wasting," a spokeswoman said.