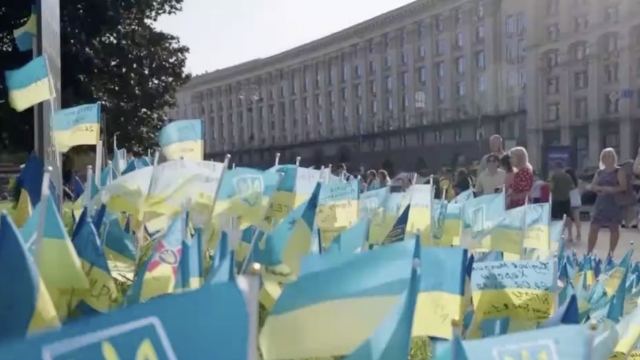 Ukrainian Independence Day and the six-month anniversary of Russia's invasion fall on the same day, drawing different displays across the country.

Ukrainians are calling it a parade of Russian tanks, but not, as they point out, the one Vladimir Putin envisioned.

The display of captured Russian weapons of war celebrates Ukrainian Independence Day, when the country separated from the Soviet Union 31 years ago. It also comes exactly six months from the opening salvo of Russia’s invasion.

Families flocked to Kyiv’s main thoroughfare to see history, even as it’s still being written.

Dozens of tanks that were destroyed in the very early days of the conflict are monuments to Ukraine's surprising and punishing blow to Putin and to how Ukrainian forces thwarted his plans to capture the capital.

NEWSY'S JASON BELLINI: I have to imagine President Putin looks at this as a provocation.

EVHEN SHUPIK: Of course. They had a dream they will capture Kyiv in three days. Russian tanks appear here in the center of the capital of Ukraine. We made their dreams come true.

But as a counterpoint to the bravado, Ukrainian leaders are warning that Putin is likely to order strikes across the country this week.

A presidential adviser predicted Kyiv will once again be a prime target.

“They will try to increase the number of cruise missile attacks on a number of our cities," said Mykhailo Podolyak, adviser to the head of the office of the president. "Kyiv will be on the list of these cities of course."

President Volodymyr Zelenskyy himself made even more dire warnings, saying "We must be aware that this week Russia may try to do something particularly disgusting, something cruel.”

Ratcheting up fears of an attack, the government added two new notifications to its air raid warning app, church bells for a chemical attack and an alarm bell for radiation danger. Kyiv’s subway stations are closing an hour early so they can be used once again if needed as air raid shelters.

Despite such apprehension, the capital's spirit was one of defiance.

On Monday, the rusted relics of a war not over served as a playground for Ukraine’s next generation. A 13-year-old Kyiv resident said the message shows "... we are much stronger."

On the side of the road where the Russian tanks are displayed is a different type of display: flags representing Ukrainian soldiers who have been killed the past six months. An army general said Monday that number is around 9,000, with no signs of the fighting becoming any less intense and deadly.