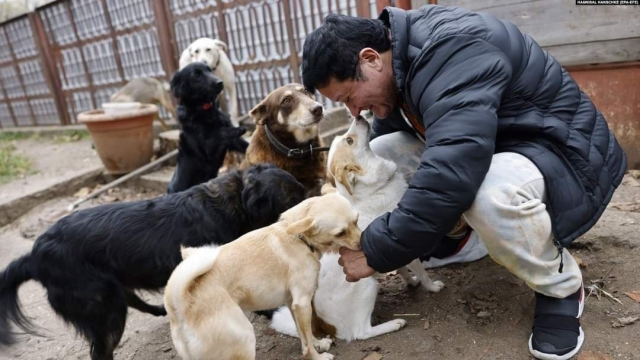 Russia has bombed or fired missiles at Mykolaiv, Ukraine, on all but a few dozen days — a frequency unparalleled in any other Ukrainian city.

It's caused the deaths of some pet owners, and thousands have fled, reluctantly leaving behind their animals who now endure the war alone.

In the war, her front line is the place where packs of dogs and cats, former pets, scavenge for food.

NEWSY'S JASON BELLINI: You will continue to feed these animals all winter long?

ANNA KURKURINA: How can you abandon your children? These are children. We are responsible for them.

Kurkurina says she visits dogs at different locations every day she has food, but that hasn't been easy.

"Now I have no food, and I'm searching; the most tragic thing in my life is when I don't have food," Kurkurina said. "I feel really bad because all over the city and from many villages people call me and ask me for food for the dogs, and it makes me realize that animals are dying."

But perhaps even more vital are the insulated dog houses she has in her van. She's delivering them to places where the animals collect. She hopes that with the shelters and the warmth of one another, dogs there will survive the brutal winter.

In one day of Kurkurina's mission, Newsy's Jason Bellini followed along. A woman showed the forest sanctuary she built for abandoned cats at an apartment complex, and shared how one recently showed up too weak and malnourished to be saved. Later, Kurkurina met a local pet store owner who offered her some bags of food he had in storage. Then, she returned to her home, which is filled with the many animals she has rescued — along with images of her powerlifting past.

It's a commitment that NATO leaders made to Ukraine 14 years ago, but it won't happen anytime soon and some say it influenced Russia's invasion.

Before Russia's invasion in February, Kurkurina trained young weightlifting athletes. She says the sport prepared her for the war in two ways.

"First, I am a world champion, and many people know me," Kurkurina said. "It helped me to get humanitarian aid from my fans; most of them are in Germany and Spain. Second, the most powerful woman on the planet should also be the kindest."

That aid has been crucial, especially for dogs.

Although Kurkurina says cats don't really react to the sounds of war they're now hearing every day, she says dogs have been panicked since the beginning.

"Many of them have died of heart attacks," Kurkurina said. "I'm trying to find sedatives to give the dogs because a lot of their deaths are not from direct missile hits, but from broken hearts."

That's why she's using her network to evacuate them to new homes abroad, and now, with the Russian retreat from Kherson, her home will soon be down two dogs.

"These two German shepherds are from the front line," Kurkurina said. "Their owners were forced to leave during the shelling of villages near Kherson. They weren't allowed to bring them, and they've waited eight months for the moment when they can reunite."

Having a mission and all this love around her helps Kurkurina stay strong, even with her girlfriend being away since February.

"There was the threat that Mykolaiv would be captured," Kurkurina said. "I was worried because she is a very beautiful girl — blonde. Since the Russian army is not very humane with young, beautiful girls, I decided to send her abroad."

Days after Newsy's interview with Kurkurina, Russian missiles struck another apartment complex in Mykolaiv, killing six. But it appears nothing will force a world champion of kindness to quit.

"I won't leave them; I won't be able to ever," Kurkurina said. "You can't continue to live in peace when you save one life while thousands of others die."